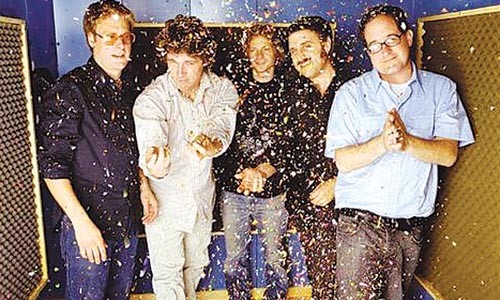 Boys in America: The Hold Steady

The Hold Steady's music hits like early Springsteen raised on old Replacements records -- streetwise anthems bashed out with the reckless power drive of guys who cut their teeth on classic punk. But early Springsteen wouldn't start an album by quoting Jack Kerouac's Sal Paradise character just because he thought the line was kind of funny.

As the band's Craig Finn explains, the inspiration for the opening track and the title of the Hold Steady's new album, Boys and Girls in America, come from a quote early in On the Road. "He says 'Boys and Girls in America have such a sad time together.' What he says is they jump into sex before they have real talk. And not 'talk' meaning 'courtship' -- real talk about souls and things like that. So I just sort of thought that line was funny."

And it's not the only line that speaks to Finn's ability to find the humor in most any situation. There's a classic tossed-off line in "Hot Soft Light," a dark, dramatic tale of drugged-out decadence that winds up in the hospital. "It's from [Judas Priest's] 'Screaming for Vengeance,'" Finn says. "'The world is a manacled place.' I always wondered what that meant."

But despite the occasional flashes of humor, the overall mood of the album is one of overwhelming desperation, fueled by tales of broken heroes, suicide and drugs that just don't work the way they did when life was fun. "Massive highs and lows are just more interesting," says Finn.

That's why so many of his characters are in their late teens.

"When you're 17 to 19," Finn says, "you just have a lot of highs and lows, so things seem bigger. Things take on greater significance. It's do-or-die. When you're 17, if there's a party Friday night and you can't go because you have to go to your aunt's birthday party, you're like, 'No! I can't miss this.'"

But would that 17-year-old be able to appreciate this record on the level it was meant to be appreciated on? "They might get something different out of it than a 34-year-old like myself," Finn says, "but I watch Sesame Street and there are things I think are really funny that I'm sure a 5-year-old doesn't catch. But the 5-year-old still enjoys it."