Questions of quality, skill or reputation do not really enter into this show 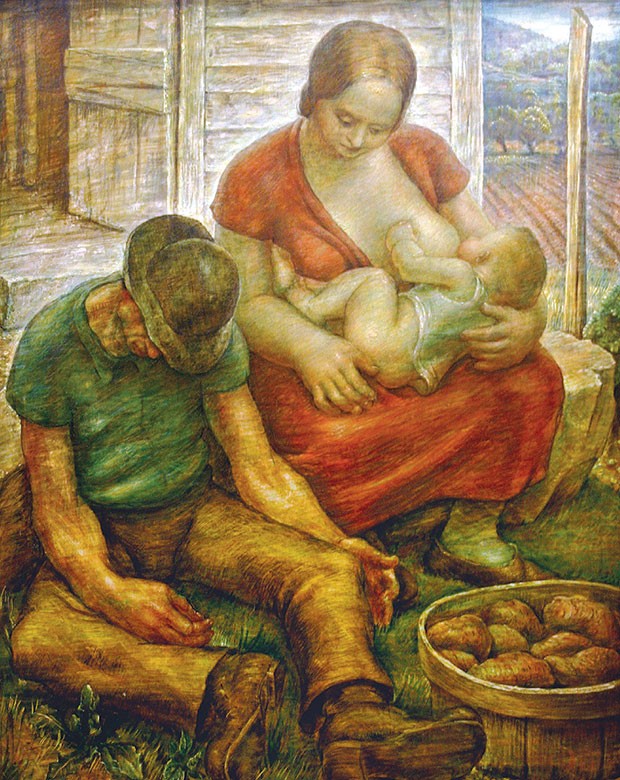 THE GIFT OF ART

continues through June. Heinz History Center, 1212 Smallman St., Strip District. 412-454-6000 or heinzhistorycenter.org
Arts education is very much in contention these days. Advocates insist that the drive to emphasize science, technology, engineering and math must also add an A for arts, if youngsters are to be educated suitably. STEM must become STEAM. Yet amid rampant education de-funding, detractors perceive visual art as extraneous and mark it the first thing to go. So we have an apt historical moment for the show The Gift of Art, at the Heinz History Center. What is the utility of visual art in schools?

This is a centennial celebration of a practice inaugurated in 1916 by One Hundred Friends of Pittsburgh Art, a sub-group of the Associated Artists of Pittsburgh. The Friends donate funds to buy works from AAP’s yearly show and give them to city schools.

Absent any record of an articulated approach to the curriculum of the time, it now seems a bit quaint to think that simply exposing students to works of art will be beneficial. Indeed, the curatorial stance of The Gift of Art is to engage actively with pedagogical approaches through which art can teach.

The exhibit is divided into eight sections that largely pose thematic prompts about works of art.

“Who Am I?” underscores the medium’s capacity to express identity. Ruth Richardson’s “Children Waiting” (1980), with two small African-American children standing tentatively outside a room full of school administrators, provides a continuingly relevant rumination on race and school politics.
By contrast, Roy Hilton’s “The New Dress” (1934) is more gently dappled and spatially rendered. But its strength, as in Richardson’s work, is a study in personal resourcefulness and challenge.

Unexpectedly, “A Sense of Place” is one of the weaker sections. Usually, you can’t go wrong with Pittsburgh landscapes (no other places need apply). But Abe Weiner’s “Back of Isaly’s” appears muddied rather than fresh. Meanwhile, out in the History Center atrium, Doug Cooper’s multi-story Pittsburgh mural hangs permanently; this 20-year-old work is still fresh and still teaches lessons about place and art-making, perhaps better than the works in this exhibit.

Questions of quality, skill or reputation do not really enter into this show, which is fair enough, because that is not part of its expressed mission (and the presumption is that One Hundred Friends of Pittsburgh Art, who remain active, were doing their own curating as they went along). The result, though, is that while a few works seem like slightly underachieving examples of a type, others are real show-stealers that don’t quite receive their due in presentation.

Samuel Rosenberg’s “Rest” (1941) and Russell Twiggs’ “Mosaic #1” (1951) are, in diverging ways, especially strong works by textbook Pittsburgh masters. It’s almost as though the artistic greats constitute their own unlabeled show that you have to find yourself. It’s a fun exercise.

Indeed, other components of the exhibition would be compelling shows on their own. In a screening room at the Center, a slide show runs through more works from the collection. These include an additional order of paintings, with more of an emphasis on abstract work. Robert Paul Karlen’s “A Pattern of Restless” (1943) is a particularly provocative piece of hard-edged abstraction at the edge of dream-like surrealism. But it clicks by so quickly, and you have to wait several minutes for it to come around again. (Buying the catalogue partially alleviates this problem.)

Still, supplementing the wall-hangings with slides seems like a reasonable compromise: The larger and more typical audience is going to get more out of the big introductory-level show, which has its own structuring logic.

Then there are the missing works. During a century of inconsistent oversight, many pieces walked out the door. Nearly 200 of them are reproduced in groups on 9-by-12-inch cards, with the milk-carton-like plea in the museum text. Have you seen me?

A canvas by iconic steel-mill impressionist Aaron Harry Gorson disappeared at some point — into the auction house maybe, given the value of his other works? Wall text explains that the Pittsburgh City Schools have offered amnesty, and they have received just five returns as a result. These stories themselves could make for a show, or some kind of online presence for the ongoing project of recovery.

In a city full of art museums, The Gift of Art does seem like a good fit for for the History Center, given the focus on Pittsburgh’s artists and schools. And the curatorial approach seems suitable for a general audience that will wander in after seeing other History Center exhibits on unrelated topics.

But its more specialized subtopics give this exhibit an additional appeal that could be emphasized even more without compromising its core mission.