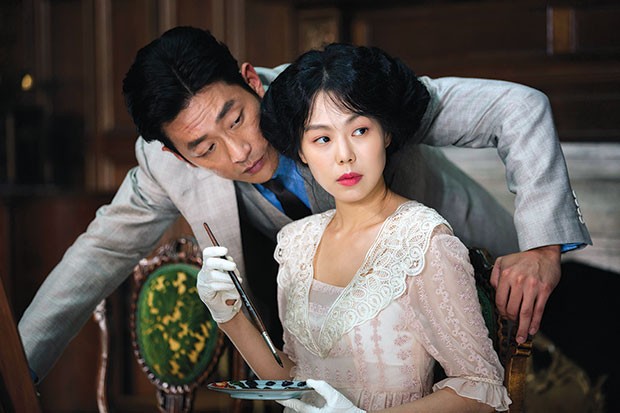 But Sook-hee is actually a member of a thieves’ gang, dispatched as an undercover operative by her boss (Jung-woo Ha), who is posing as a Japanese count and hoping to marry the wealthy Hideko. In this exploration of a long con, to say more about how the story unfolds would spoil the film’s pleasures.

Naturally, the film features a lot of duality: the two physically similar women who share clothes; characters pretending to be another; the bifurcated mansion that is part English, part Japanese; and even the film, which offers “Part One” and “Part Two,” each telling the same story differently.

The Handmaiden has antecedents in Victorian melodrama (orphans, gentry trapped in creepy houses); the slow-burn of Hitchcockian suspense; and the more modern technique of non-linear narrative, which both hides and reveals information. And like other grand period pieces, the film is beautifully produced, with fine cinematography and exquisite sets and costumes.

There is also a fair amount of sexually explicit material, with roots in vintage erotica, that toggles between meaningful and titillating. In a work that is ultimately about female sexual empowerment, there are scenes that can be read as exploitive. But Park does have a loophole: He is depicting a milieu that favors male sexual dominance, and these men are presented as emotionless sadistic spectators.

The third part resolves the incongruities of the first two and drags a bit, even as Park adds more sex and violence (for fans of his earlier Old Boy, there is even a creepy octopus cameo).With a two-and-a-half-hour running time, the film could have been tightened up, but understandably a work that is in part about self-indulgence is apt to become padded.