The Haitian Art Gallery shows great art for a good cause.

Some of the paintings are surrealistic, precisely naturalistic or impressionistic, and more than a few show awareness of modernism. 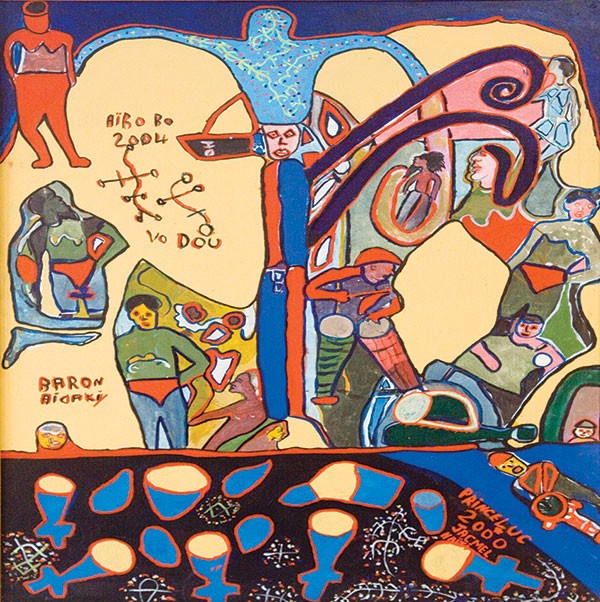 An untitled 2000 painting by Prince Luc

There may be someone out there who doesn't like Haitian art but I would need to see proof. And while there are other places in Pittsburgh to see Haitian art, Friends of HAS Haiti is hard to beat. (HAS, or Hôpital Albert Schweitzer, is a separate nonprofit to which Friends contributes.)

The Friends of HAS Haiti are known for their annual H'Art and Soul of Haiti benefit, which has featured prominent musicians such as the Tom Tom Club, along with a large selection of Haitian art for sale. The Friends also maintain a Haitian Art Gallery, which had been tucked away on a low-profile second floor, but recently relocated to a ground-floor space in Point Breeze's "main street."

The gallery is an informal affair, basically filling the office walls with many dozen Haitian artworks. The staff are welcoming and you can get a pretty good idea of what the art might look like competing with and complementing the contents of your home (in contrast to the white void of most art galleries). HAS dates to the 1950s, with the Friends established as a separate nonprofit in 1999, and clearly it is well established in its ties to the Haitian art community.

Many of the paintings are fine examples of what you might think of when you think of Haitian art: namely, brightly colored genre scenes in a folk or primitive style (more Grandma Moses than Michelangelo, yet not unsophisticated). But there's a broad range of styles here, with some of the paintings being surrealistic, precisely naturalistic, impressionistic, expressionistic or abstract, including more than a few showing some awareness of modernism. There are also examples of metalwork cut from old oil drums and hammered to make reliefs of decorative motifs or scenes of native life. There are some exuberant sequined works, as well. Some of the art can be viewed online, with the gallery's website currently under expansion.

The Friends are dedicated to raising awareness of Haitian culture and supporting Hôpital Albert Schweitzer through the sale of Haitian art as well as through other programs. In addition to conventional health services, with the support of the Friends, HAS has developed forward-looking environmental, economic and cultural projects, including reforestation and disease prevention. It's a perfect fundraiser: Support a terrific cause, take home terrific art.