“They had their lives, their existence pried from their cold, dead hands.” 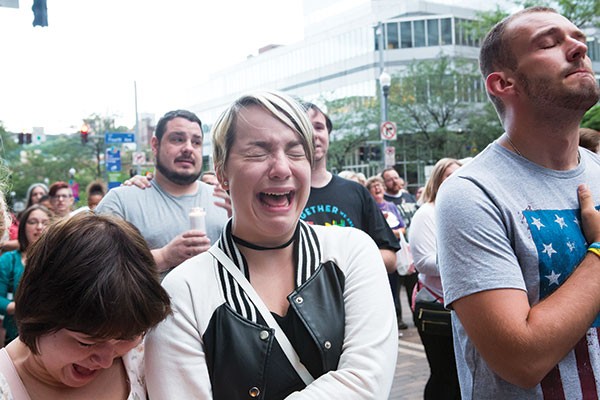 Photo by John Colombo
Hundreds gathered on Monday night at the City-County Building in Downtown Pittsburgh to mourn the victims of the Orlando tragedy.

It’s 2 a.m. I’m wide awake for the second straight night and I can’t get those words out of my head.

Three words crashing around in my head more violently and more rapidly with each passing second. The sound in my head is like a tennis ball repeatedly crashing into a metal garage door. It’s more like driving, joyous dance music thundering off the walls of a packed nightclub.

But it’s most like the sound of dozens of bullets flying out of the barrel of an assault rifle rudely cutting through the sound of the music; indiscriminately ripping through flesh; killing dreams; ending lives.

Maybe the man who walked into Pulse, an LGBT dance club in Orlando, had those words in his head. You know, like the flippant pro-gun mantra: “You can have my gun when you pry it from my cold, dead hands.” It’s like the NRA way of saying: “Mission Accomplished!”

Whether he thought it or not, that’s how police took Omar Mateen’s gun from him after he slaughtered 49 people and injured more than 50 others with it. Mission accomplished, I guess?

“Know guns, no peace. No guns, no peace.” “Guns don’t kill people, I do!” “Kill ’em all, let God sort ’em out.” “Gun control means holding on with two hands.” “Criminals love gun control — it makes their jobs safer.” The NRA and gun advocates have a million T-shirt ready slogans. They’ve become prolific at writing them. Almost as prolific as they are at making excuses and pointing blame in other directions when someone picks up a gun and butchers people who’ve committed no crime. People who are just trying to dance and have a good time; or go to school; or go to the mall. People just trying to live their lives. People who have a right to live their lives with some degree of certainty that they’re not going to die in a club or in a school or in a church.

They weren’t armed. They shouldn’t have had to be. They had their lives, their existence pried from their cold, dead hands.

But don’t blame the gun or the easy access to it for this crime. It’s no more culpable in Orlando than it was in Sandy Hook, or Virginia Tech, or Columbine, or San Bernardino or Fort Hood. That’s what the NRA is telling us today. This shooting was the FBI’s fault because “political correctness” kept them from arresting Mateen, who had been investigated for alleged ties to terrorists. But despite those investigations, Mateen was still able to legally purchase a firearm, walk into club and take lives at will.

The shooter also claimed ties to Muslim extremist groups. Gun advocates are seizing on that. He’s not a normal good guy with a gun, he’s a terrorist. The NRA can’t control terrorists, after all. However, Mateen reportedly claimed loyalty to ISIS and Hezbollah, two groups who are typically at odds. So it’s unlikely he belonged to both, or to either. Also he was an American citizen, born in New York City. He was one of us. He was one of you, a Second Amendment-loving all-American boy who bought a gun because he was legally allowed. It was his right. The gun lobby has made sure of that.

Am I too harsh to blame every gun owner, advocate, group and lobbyist for Omar Mateen’s action? Normally I would think so. But I’ve learned something from these people: the art of placing blame. Gun advocates have already blamed the FBI, and ISIS is being blamed for this despite any facts proving that Mateen was anything more than an admirer of the organization.

So when I say that the NRA, the gun lobby and every goddamned gun apologist in this country is responsible for what happened in Orlando, I’m using their logic to reach that conclusion. These people have spent millions of dollars on lobbyists, and on campaign donations to friendly legislators, to make sure that gun laws are weak, toothless and never changed. You have gone to great lengths to protect your guns, so now you have to own up to your part in this. But you won’t; you never do.

Do I favor a full ban on firearms? I do; admittedly, I’m at the opposite extreme. But at this point in our history, we can’t even have a conversation in this country on limiting access to certain types of weapons without someone yelling about their rights being violated. But what about the rest of us? The last I checked, we had certain inalienable rights, the most important of which is the right to live. That right doesn’t put anyone in danger. That right should allow us to go to clubs and to school and to the movies without fear of catching a bullet in the chest. However, our rights get trumped because we’re not paying millions for lobbyists and members of Congress to take care of us.

We pay with our cold, dead hands.