The Guard at City Theatre 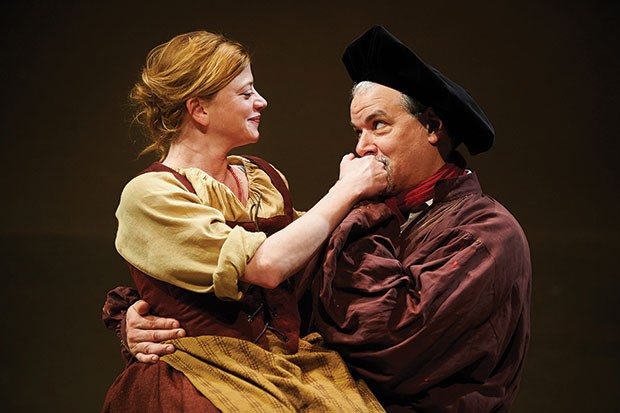 Photo courtesy of Kristi Jan Hoover
Melinda Helfrich and Andrew May in The Guard, at City Theatre

continues through April 2. City Theatre, 1300 Bingham St., South Side. $15-59. 412-431-2489 or citytheatrecompany.org
Death. Depression. Lots of laughs. That’s the package City Theatre offers with its production of Jessica Dickey’s The Guard. The 2015 comedy-drama-fantasy also packs a lot of discussion about art: not just the painting that’s the focus of the tale, but also poetry, philosophy — all forms of creativity and existential questioning.

Dickey’s layered plot moves through time and mind, starting in a museum contemplating Rembrandt’s “Aristotle With a Bust of Homer,” then getting into the Dutch artist, thence into the Greek poet. Lots and lots of dialogue, deftly delivered by five actors, each playing two roles that mirror each other.

Andrew May portrays the title character, Henry, by vocation as well as occupation a museum guard, as sensitive and well spoken. It’s quite fun to watch May morph into the lusty, flamboyant Rembrandt. Henry tends to hide his passion, which Rembrandt wears on his sleeve. The artist is not shy with his castigations of the vulgar, while the more guarded Henry is polite.

The best scenery-chewing, though, comes late in The Guard from Raphael Nash Thompson as two poets: Homer, arguably the world’s first; and Simon, Henry’s dying husband. The former strides the stage bigger than life, the latter huddles almost motionless in bed, but both have a lot of great laugh lines and serious insights.

Melinda Helfrich is both ingénue (Madeline, art student) and leading lady (Henny, Rembrandt’s long-time mistress). The juvenile in both eras is nicely balanced by Stephen James Anthony as Dodger, Henry’s new colleague and a rebellious artist; and as Titus, Rembrandt’s loving but very worried son. Helfrich and Anthony produce a nicely comic sexual spark in the museum. The only cast member remaining in the present, Billy Hepfinger supports the play as Jonny, the awkward and armed guard, and as Martin, the pert nurse.

Directed by City artistic director Tracy Brigden with her usual panache and a talented design/tech team, The Guard is a banquet for the eye as well as the mind. And if you care, the painting is really in Gallery 637.