The Greatest Movie Ever Sold

A superficial study of product placement that should be more entertaining. 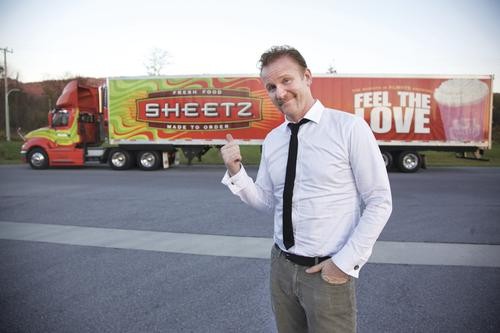 In his new documentary, Morgan Spurlock (Super Size Me) wallows in the mire to expose a scandal: Hollywood filmmakers, who could teach whores a thing or two, take money to place brand-name products in their movies.

OMG! Do you mean Tom and Sally Character don't really eat Oatios or drive a Toileta? Do you mean they're only doing it because someone PAID THEM TO? Thanks, Morgan: I'll never look the same way again at banal, unoriginal, computer-generated, 3-D Hollywood commercial cinema.

To be fair -- and I'm certainly under no legal obligation to be -- that's not quite (or not entirely) what Spurlock's film is about. But I wanted to sell you on reading this review, so I overstated a bit. "Advertisements that say they're lying are telling the truth," Ralph Nader tells Spurlock in The Greatest Movie Ever Sold. In other words: Trust me.

Spurlock's movie is mostly about the danger of ubiquitous advertising. If you're the type who buys things just because you think a product will make you feel good or sexy or hip, then what Spurlock (air-quotes) reveals will be new to you, and you won't see this film anyway. (Too -- double air-quotes -- intellectual.) And if you already know about stuff like this, then by all means, go see his film and feel good about yourself.

Sacha Baron Cohen makes fools of people in his mock documentaries. Michael Moore lets people make fools of themselves. Spurlock is gentler than those two, and much less interesting, although much more charming. He's a playful fellow, and the premise of his film -- he documents his efforts to fund it by finding sponsors to place their products in it -- certainly yields some flashes of humor, insight and sly social commentary.

The companies that take part in his film probably agreed to do so for the same reason that politicians go on late-night TV: People won't take you seriously if you can't laugh at yourself. Even Nader takes a ribbing, no doubt to seek forgiveness for handing Dumbo the presidency (with a little help from the Supremes). And what companies take part in Spurlock's film? Sorry, but I plug no one without my payday.

I could tolerate a superficial movie if it were a little more entertaining. But Spurlock's last half-hour is interminable, like an infomercial, only without food or things being cleaned up. If you don't like commercials, then don't buy the products being advertised. Spurlock would say it's out of our control, and he'd be wrong: The choice to be duped by a sales pitch is ours and ours alone. Starts Fri., May 20. Pittsburgh Mills