The Great Gatsby at Prime Stage

An entertaining if soapy adaptation of Fitzgerald's classic 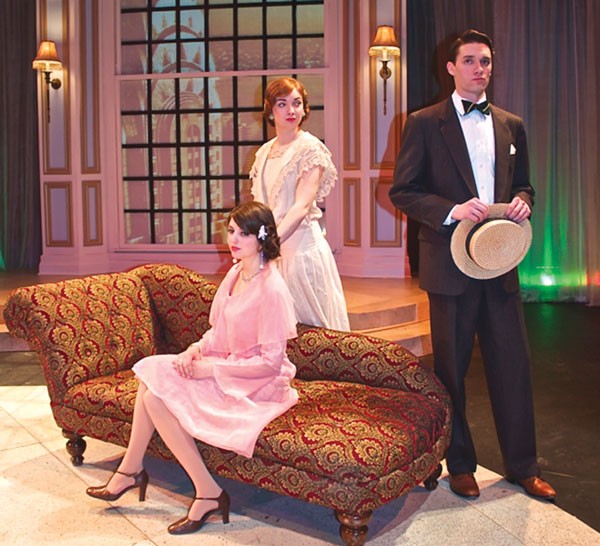 I'd like to extend to Prime Stage Theatre the greatest praise possible for its production of F. Scott Fitzgerald's The Great Gatsby, in an adaptation by Simon Levy: I left the theater wanting to read the book.

Which, I'm ashamed to say, I never have. So as a Gatsby-virgin, I found most of it compelling, even mysterious, and an astounding exercise of language. That F. Scott sure was a terrific writer! (The Fitzgerald estate is welcome to use that as a pull quote if it would like.)

It's all about a Midwestern naïf, Nick Carraway, who falls in with a very bad Long Island Jazz Age bunch. Love's young dream dies, as do a few other things, and back to the Plains states Nick goes.

I'm sure Gatsby fans will find that description reductive, but it highlights the one major problem of this adaptation: Levy, obviously, can't put the whole novel onstage, so by necessity he moves from plot point to plot point. I haven't read the book but I can't believe something regarded as The Great American Novel could be the soapy if entertaining melodrama that Levy has adapted.

It's not Levy's fault: Any stage adaptation will suffer the same fate — and, in fact, Levy does manage some gorgeous moments. But there's got to be more to Gatsby. And this production makes me want to find out what I'm missing.

Levy's crafted a swift version uncluttered by too much stage narration. And thankfully Richard Keitel is on hand as director to move the production along with as much dispatch as Levy. (Although the scene changes could have been plotted more elegantly.)

Keitel's focus is clearly on guiding his actors to create fully realized characters, and they've certainly done that. Andrew Swackhamer is a haunted Carraway, destined for ineffable loss. Sean Patrick Sears is just off-kilter enough to make Gatsby seductive and threatening, and Julia Warner and Ryan Kearney make for a frightfully corrupting couple as Daisy and Tom. Katie Oxman's Jordan is a steel-eyed good-time girl gone wrong and I make a special mention of Alexis Cash for her moving turn as the tragic Myrtle.