Eccentric as it is, every arty choice in Quantum's show has purpose, and the personal becomes so political it hurts. 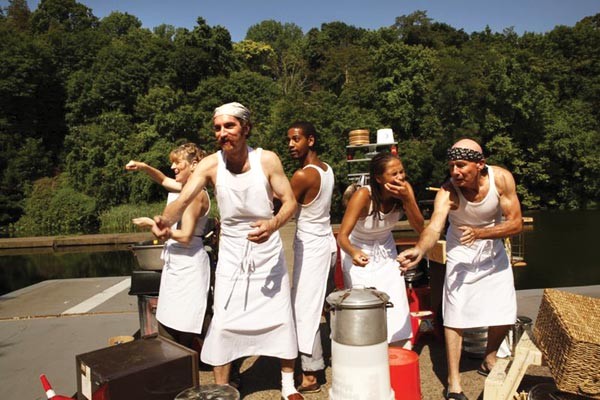 There are two things you should know, before entering The Golden Dragon. One, "boat people" are refugee immigrants, usually from Vietnam. Two, the play was written by Ronald Schimmelpfennig, the original language is German, and most of the action takes place in modern Germany. Quantum Theatre doesn't offer much context about its latest production, so before you leap into this fast-paced, avant-garde think piece, you should brace yourself.

The Golden Dragon takes place in a generic pan-Asian restaurant, where the staff toils over burning woks, and everybody's legal status is dubious. The characters are all Asian, but they have no names, and while the cast is diverse, not a single Asian actor performs. Instead, a woman plays an old man, a mustached man plays a female flight attendant, an elder man plays a young man, and so on. In a Brechtian twist, none of the actors really "matches" his or her parts. After all, can't a Yank play a Brit? Can't a Spaniard play Mexican? Why shouldn't a young African-American man play a Vietnamese girl in sex-slavery? Aren't they acting, after all?

On paper, Dragon should be a sloppy, preachy, experimental mess. But it's not. The cross-casting is both powerful and an exciting theatrical challenge. David Tushingham has somehow translated the German into fluid English, and even the flashes of humor are bitterly funny. The play is dark, in that post-colonial way, but the ending is tragic, not hopeless. They even tell the parable about the ant and the grasshopper, which should make eyes roll with irritation, but the tale evolves into a very real horror story. Eccentric as it is, every arty choice has purpose, and the personal becomes so political it hurts.

Karla Boos stages Dragon on the cement docks of Highland Park's Carnegie Lake, and although you could just as easily stage it on the moon, she uses the murky pond's geography to beautiful effect. Gregory Johnstone, Aidaa Peerzada, Curtis Jackson, Catherine Moore and Mark Conway Thompson are a dream team of character actors. They avoid the bad Vietnamese accents and cartoonish impersonations of a lesser show. Pittsburghers may not know much about Asian politics or migration, but Dragon offers a fiery glimpse.