The Glitter Box Theater, a new DIY-space in Oakland, is all about affordability and accessibility | Music Issue | Pittsburgh | Pittsburgh City Paper

If a performer or organization has the desire and passion to put on a show, they don’t want a lack of money to deter them 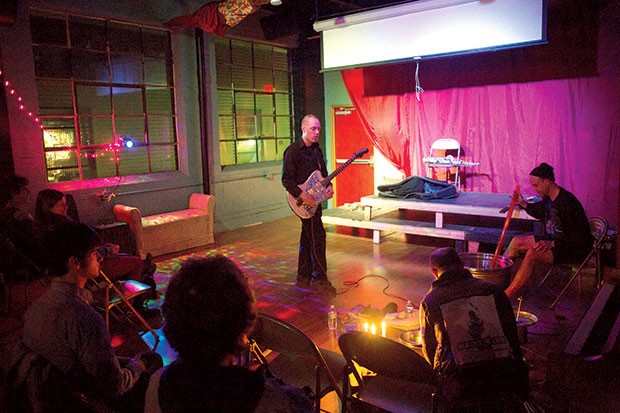 Pittsburgh’s Pittonkatonk is a year-round venture

Looking at The Glitter Box Theater’s event schedule for April, you’ll see yoga classes, self-defense classes, an evening of Star Wars burlesque, dance workshops and a meeting for members of the International Alliance of Theatrical Stage Employees union. The venue, which opened in Oakland in early January, hosts concerts too — next week it’s got Ben Grubb and a Pittonkatonk after-party — but the mission goes wider than that.

“Music is not our first priority by any means,” says Matt Eaker, who runs the space along with Teresa Martuccio, Chris St. Pierre and Nick Stocks. “But Pittsburgh was lacking a place that catered to female-led music, queer music. Pittsburgh has a really cool music scene, but it really caters to — nothing against anybody — but white-dude rock ’n’ roll. And as much as individual members here are into white-dude rock ’n’ roll sometimes, we’re just not really interested in providing one more space for that.”

The organizers of The Glitter Box have all worked in various capacities in booking and organizing grassroots theater and DIY events, so they knew the challenges and financial risks involved. Many radical and DIY spaces across the country have closed in the past 15 years due to rising rents, says Eaker. The concept for The Glitter Box was to address the lack of affordable DIY spaces in Pittsburgh.

Eaker came to Pittsburgh five years ago, after stints working in DIY theater scenes in Nashville and Tucson. He’d been frustrated by the “up-and-coming vibe” and false trendiness of the other places he’d lived, and was blown away by the level of commitment he witnessed in the scene here, despite the weather.

“I came to Pittsburgh in the dead of winter, and people were doing shit and having fun and talking to each other,” Eaker says. “I was like, ‘Holy shit.’ That’s what drew me here.”

In the time since, he became immersed in a loosely organized social scene that revolved around leftist activism, DIY shows and non-traditional theater. When a space opened at 460 Melwood Ave., Eaker and crew decided to bite the bullet and move forward with The Glitter Box.

When they moved in, the space was framed and dry-walled, but otherwise an unfinished room. After months of renovations, it’s now a welcoming, clean and well-decorated venue, featuring some seriously good-looking hardwood floors, a lounge outfitted with couches and a homemade bar, and, in Eaker’s words, “the most beautiful macramé shit you’ve seen in your whole life.”

While organizers host the occasional BYOB night, many events at The Glitter Box are all-ages, and they’re hoping to expand the audience base to as many demographics as possible. They also host political-activism events free of charge. As of this month, they’re hosting around six events a week, but looking to grow.

Since the organizers make no profit and aim only to make their rent and insurance each month, ticket and booking prices are kept low and flexible. If a performer or organization has the desire and passion to put on a show, Eaker says they don’t want a lack of money to deter them. Sometimes they waive the fee altogether.

When asked what issues he’d like The Glitter Box to address, Eaker’s answer is far more wide-reaching than expected. He talks about topics facing the country at large, like police brutality and the pitfalls of capitalism, and how they relate to Pittsburgh. It sounds like an answer to an entirely different question, but it’s clear that Eaker sees The Glitter Box’s role going beyond simply providing entertainment or hosting parties. At such a tumultuous time in American politics and culture, a welcoming community-based space can provide fertile ground for change and activism. They’re hoping The Glitter Box will do just that.

“The same shit in this polarizing, amazing time in history of the United States, that every single person with a brain is talking about, that’s the shit I want, that’s the shit everybody in this fucking building wants: radical change in this country. That’s what I want.”

Pitt Gets Alternative: the ins and outs of starting a DIY music festival