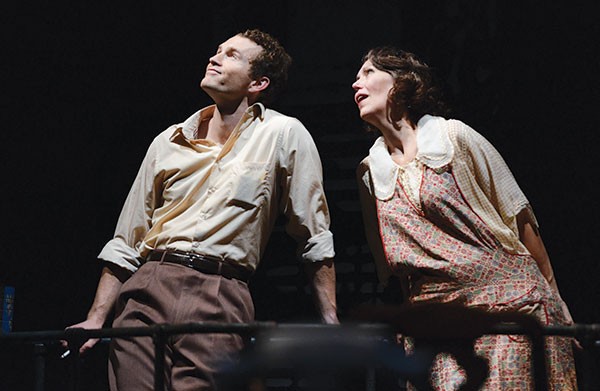 When I was in high school, I bought a subscription to the premiere season of Pittsburgh Public Theater. Its first production was of Tennessee Williams' heart-shattering classic The Glass Menagerie.

Here we are 40 years later, and as the Public marks the anniversary with a new production of Menagerie, there I sat watching it again ... not as a fresh-faced kid, but as the legendary cultural tastemaker I've become.

On the whole, I have to say the Public has aged far better than me.

By now, I hope we all agree that Menagerie is the greatest American drama ever written. Williams turned a life of suffering and heartbreak into a work of unspeakable beauty.

We're in the rundown St. Louis tenement flat of Amanda Wingfield and her children, Tom and Laura. Each exists in emotional torment, clinging together in refuge from a world certain to destroy; yet the tighter they cling, the more likely they are to destroy each other. Later a fourth character enters, the Gentleman Caller, who precipitates that destruction.

Director Pam Berlin, I'm happy to say, doesn't resort to ego-fueled directorial tricks or gimmicks; she approaches the play squarely and allows Williams' beauty to shine through. I will say that, curiously, she shies from the harrowing stakes central to the work; much of the desperation and subtext lay inactivated.

This is especially clear with Fisher Neal, who informs his portrayal of Tom with a certain jaunty cheerfulness and remains an unaffected visitor in his own life. Writing a poem seems implausible, if not impossible, for this Tom.

Lynne Wintersteller attacks the role of Amanda with tremendous energy and speed, though I'm not sure we are ever shown that Amanda is unconsciously driven to be the crushing force she is. Only the painfully bruised Cathryn Wake, as Laura, gives a sense of the hidden life each character retreats to in crisis.

But I should say that I've never seen a "perfect" Menagerie; I'm not sure it's even possible. What I hope for is a chance to hear once again Williams' glorious song of sorrow, and I'm happy to say this production provides that opportunity.