The Giver at Prime Stage 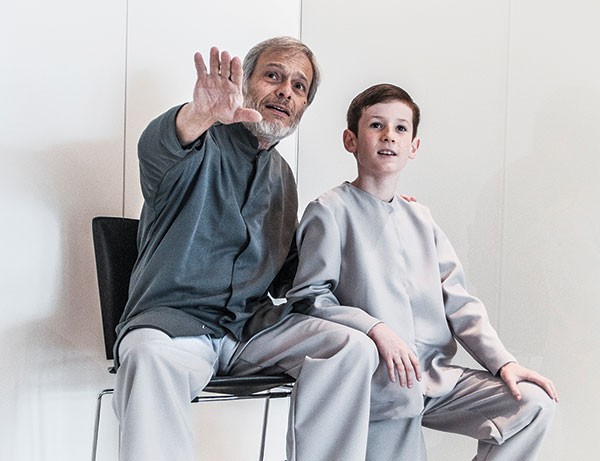 Prime Stage Theatre has created a new kind of experience that should be called “Intelligent Family Drama.” Its production of The Giver is just as challenging and entertaining for children as it is for adults. This isn’t “children’s theater”; it’s theater that speaks to an entire family, without condescension.

The imagination and intelligence that went into this show is clearly evident, starting with Eric Coble’s 2006 adaptation of the Newbery Award-winning novel by Lois Lowry.

Director Melissa Hill Grande doles out the action slowly, building a picture of what could be a perfect 1950s family, except for the monochromatic clothing everyone wears, similar to the conformist garb of Maoist China. Uh oh — dystopia alert! But shrewdly, Grande avoids hitting us with any didactic hammers.

Ricardo Vila-Roger plays the kind of father every kid would love to have, in an impressive, understated manner. The way he brings an orphaned baby into the household is touching, until we find out what lies beneath his altruistic persona.

Will Sendera is remarkable as his son Jonas, who at age 12 is designated the “Receiver” of memories in the Community, and carries the play’s action forward with uncommon authority. In fact, all of the child actors are excellent, and share the acting burden equally with the adults.

This is a world where “it’s rude to point out differences,” and “inappropriate to use imprecise words like ‘love.’” Lines like these are slipped into mundane conversations, and we are lulled by their innocence, until their implications start to have life-and-death repercussions for Jonas and his family.

Joe Spinogatti’s stunning video projections are played across of 26 panels hung on the back wall of the stage like a hip 1960s TV variety show, and become increasingly crucial to the impact of the performance, right to the ending.

And what a sublime ending we are given. Astonishingly, here is a play that can enlighten kids without slam-dunk platitudes, or purple dinosaurs sermonizing in sugary language. Producing artistic director Wayne Brinda and his team pay the highest compliment to the audience by leaving the work of interpretation up to us. Imagine that!