The Gist Street Reading Series returns for its annual cookout.

When the Gist Street Reading Series resumes this week after six months of quiet, think of the time off less as a hiatus than as an extra-long intermission. After all, there won't be much different about the format -- good food, good literature -- that's made the monthly series that debuted in March 2001 a consistently sold-out evening.

"We just had never taken a break for seven years," says Gist Street co-founder Sherrie Flick. "It was like, 'Let's just take a little breather.'"

Fellow organizers Nancy Krygowski and Rick Schweikert agreed. But while there hasn't been a Gist Street reading since December, the trio has scarcely lain dormant. And not just in terms of scouting poets and fiction writers to invite to the loftlike Uptown studio of artist James Simon for receptions that typically feature bread and ice cream homemade by a neighbor. That part comes a little easier, because Flick, who writes fiction, poet Krygowski and playwright Schweikert just plain read a lot to begin with, and Gist Street is moreover on enough publisher mailing lists to keep the pump primed.

Indeed, Gist Street even took advantage of the break to upgrade its Web site, which now includes video "pod snacks" of favorite readings. And the series marked the publication of Writers in the Gardens, a chapbook of work by poets who read at a 2007 event it co-sponsored with City of Asylum/Pittsburgh, which shelters writers in exile.

Rather, the half-year off helped mostly in the form of logistics that temporarily didn't need calculating: deciding which poet would read with which fiction writer; figuring out how to make writers' schedules fit the series'; picking writers up at the airport; and making sure they had Pittsburgh roofs over their heads. The last task was often suprisingly easy, says Flick. "So many people have ex-roommates, second cousins [here] -- I think someone last year ... stayed with an ex-boyfriend."

Indeed, funding from the Pennsylvania Council on the Arts notwithstanding, Gist Street remains a shoestring affair. The series pays readers a small stipend, and doesn't take a cut of any books sold. (Author readings are key venues for book sales, especially for the sort of small-press denizens Gist tends to host.) Admission is $5, and most months the audience is limited to the 85 or so who can fit in Simon's cozy loft. (Even on-time arrivals have gotten turned away at the door.) But the audience is renowned for its engagement, as testified by numerous readers on Gist's Web site. Philadelphia-based Tim Seibles, for instance, wrote, "reading in your series was one of the highlights of my life as a poet."

Audience capacity expands to about 120 for warm-weather readings, including Gist's annual Cookout Extravaganza, held in Simon's yard (whose year-round occupants include some chickens). The Sat., July 19, event is a potluck and BYOB affair; you bring grillables, drinkables and sides, while Gist Street provides the grill, grillmeisters and readers, in this case five from hip San Francisco-based literary journal and publishing house McSweeney's. Poets Atsuro Riley, Patrick Lawler, Courtney Queeney and Gerry La Femina, plus fiction writer Nathan West, will give short readings under a plum tree. 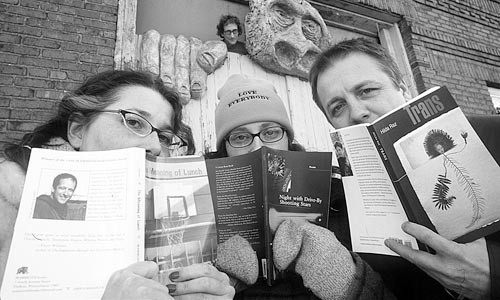