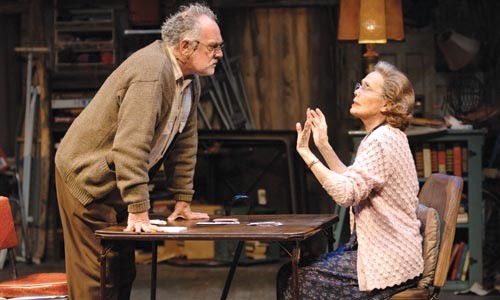 Give them a hand: Ross Bickell (left) and Lois Markle star in The Gin Game, at Pittsburgh Public Theater. Photo by Ric Evans.

All things considered, there's gotta be easier jobs than playing the two characters in D.L. Coburn's Pulitzer-winning The Gin Game, now at Pittsburgh Public Theater. The show is set on the porch of a run-down "old folks home" and concerns the relationship between curmudgeonly resident Weller Martin and newly arrived Fonsia Dorsey. Both have come to the autumn of their lives -- and this porch -- without much in the way of money, family or friends, and they find in each other a bit of companionship.

They do so by playing gin. Weller's the expert, Dorsey the neophyte, and the joke of the play is that she wins every game ... at first to Weller's chagrin, ultimately to his explosive rage.

It may not sound like much of a play, and perhaps it isn't. But Coburn has a dandy way of drawing us into his characters' lives by slipping in so much information under all that card-playing. Toward the end of the second act he neatly detonates the depth charges he's planted, to pleasing theatrical effect.

What's especially rewarding is that Coburn resolutely avoids all traces of sentimentality. These characters are far from cuddly grandparent types, and the play's trajectory lies in making them and us realize how instrumental they've been in creating their own misery. This might not sound like the praise I intend, but there are far, far worse plays than Gin Game.

At least for the audience. I can't imagine what the actors have to go through. And I don't mean acting and all that; from merely a technical viewpoint, this is a bitch of script. Many years ago I worked two different productions of this play (as well as having reviewed it many more times since) and if I'm remembering correctly, Martin and Dorsey play a total of 13 hands of gin during the course of the show. You really need to think about what that means. Thirteen times someone says "gin," and 13 times the other needs to remember which "gin" it is, and the new direction the dialogue cues from it.

Meanwhile, they're actually playing gin through the whole thing; occasionally the lines revolve around the actor taking a thrown-away card or one from the face-down pile, so all that has to be kept straight. And as a fairly dedicated card-player myself, the thought of playing a hand of cards as though it were a different hand just makes my head hurt.

So I give Ross Bickell and Lois Markle lots of applause for handling it all so deftly. As a bonus, these two have an enormous onstage chemistry which director Ted Pappas deploys to strong theatrical effect.

Ultimately, however, I have to say that the production never really caught fire for me. Bickell's a bit too rage-filled from the beginning and, conversely, Markle's too timid at the end -- which unfortunately blunts the build of the show. And, to tell the truth, the ride of that build is the only reason I can think for playing The Gin Game.