The Gift of the Magi at Point Park Conservatory Theatre Co. 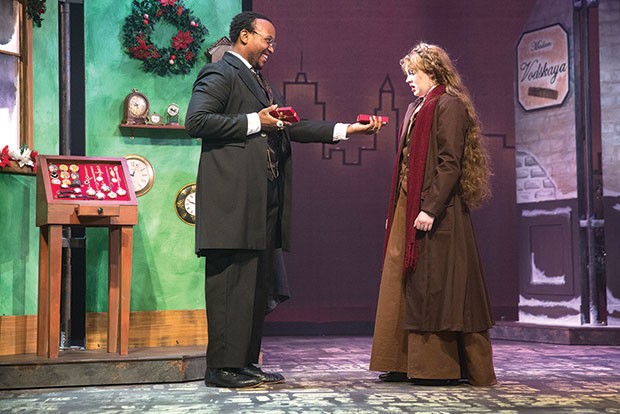 Photo courtesy of John Altdorfer
Davion Heron and Becky Brown in The Gift of the Magi at Point Park Conservatory Theatre Co.

THE GIFT OF THE MAGI

You can tell it’s Christmas when the tree goes up and the bank account goes down. But what if you don’t have a bank account? How can you prove that you love someone if you have no money to do it with?

That’s the dilemma faced by Jim (Josh Mooiweer, who would make a good Motel in Fiddler on the Roof) and Della (Becky Brown) in John Jory’s adaptation of O. Henry’s beloved short story The Gift of the Magi. With ample tweaks to stretch things out, it’s on stage now courtesy of Point Park Conservatory Theatre Co. Church mice have more money than these two, and with Christmas coming, they’re desperate to find a way to buy each other gifts that say “I love you.” I won’t spoil the ending, except to say that it only proves how money has nothing to do with love. Oh, sorry: Spoiler alert.

Penelope Lindblom directs this fleet production — a mere 50 minutes long — with a whirlwind of sound and movement: She treats us to eight Christmasy tunes, performed by the actors in character (more or less), and accompanied by a combo of two guitars, a violin and a flute. The lead guitarist (Somerset Young) doubles as the narrator — who occasionally goes meta (not unlike O. Henry), and who has a Southern accent, even though it’s set in 1906ish New York — and there’s a fair bit of dancing, although to be honest, it’s probably best called prancing.

In fact, it all feels more like a let’s-put-on-a-show Christmas pageant than a play, so you’d better be in the mood for copious good cheer. (The singers often smile so broadly that I feared for the integrity of their mandibles.) The opening-night audience loved the shtick from Madame Vodskaya (Blake Doyle), a (to hear her tell it) former Russian princess who clawed her way through tragedy, and as she touts her tangled tale, the violinist mournfully accompanies her in the spotlight.

The cast is all quite adept, which I’ve always found to be true of the kids who study musical theater at Point Park. Still, having seen the school stage Tommy and Bloody Bloody Andrew Jackson, I’m afraid that this merry confection rolls more than it rocks.