The furries are back -- just in time for a new musical about them, titled Furry Tales. | Theater | Pittsburgh | Pittsburgh City Paper

The furries are back -- just in time for a new musical about them, titled Furry Tales. 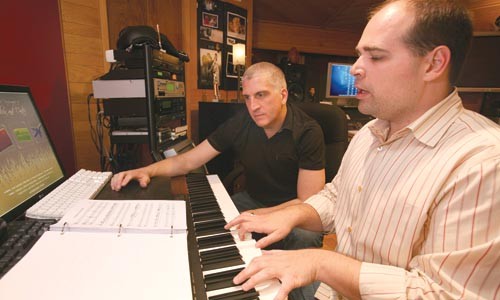 Pelting it out: Bill Medica (left) and JC Carter compose Furry Tales.
If there were any question that furries have entered Pittsburgh's cultural lexicon, a planned stage musical about those lovable scamps erases all doubt. The work-in-progress, the one-act, 90-minute Furry Tales, scurries onto the scene in a staged reading July 5 at the CLO Cabaret.

The reading is timed to coincide with Pittsburgh's second year playing host to Anthrocon, the nation's largest conference of furries. Furries, an oft-misunderstood fandom, are people with a strong affinity for anthropomorphized animal characters. Their appreciation runs the gamut from wearing Mickey Mouse T-shirts to donning full-body fursuits. Often, furries interact and build friendships and furry personas -- "fursonas" -- online. Actual in-the-fur meetings might happen only at yearly conventions.

Furry Tales was sparked during last year's Anthrocon, when Bill Medica and JC Carter of But Why? Productions were sitting at Tonic, across the street from the David L. Lawrence Convention Center. Like many in the city, they were mystified at seeing people around town in tails, ears and fursuits. As the convention weekend progressed, their thoughts about furries evolved from "preconceived notions" into the realization that "we're all a little furry on the inside."

"They're not afraid to be themselves," says Carter. "When they left, the magic left."

"They were such a force," adds Medica.

Medica, who works in advertising, has written and produced documentary films; as a lyricist, he collaborated with composer Carter on Girl on the Go, a still-unproduced musical. With the furries, the collaborators knew they had the makings of a traditional piece of musical theater -- a great drama of outsiders coming together, contemporary themes of the Internet and isolation, and, of course, fabulous costumes.

Working with Ty DeMartino, a writer from Baltimore they located on craigslist, Medica and Carter created four friends who had met online: BlueWolf22, MisoKitty2, HuggyBunny and Gorillanator. Gorillanator is the shy, parents'-basement-dwelling dork who got picked on in school; HuggyBunny the lonely poor little rich girl; and MisoKitty the rabble-rousing idealist. BlueWolf, it turns out, is something of an impostor.

The story begins with the friends preparing to meet up at the convention. BlueWolf is actually an undercover reporter for everythingawful.com, an online magazine whose editors sent him to expose all the sordid, freaky sex they suppose is going on. But, of course, in true musical-theater tradition, BlueWolf eventually realizes that he's found his real peers in the furry community as we sing, dance, and learn a valuable lesson about ourselves. As one lyric puts it, "Let people gawk and stare, fun is our one pursuit / Truth is we don't even freakin' care, we're gonna put on our best fursuit."

Furry Tales' creators hope that staging the reading during the convention will draw actual furries who'll provide feedback that will be incorporated into the show. But Why? Productions even sought the imprimatur of Samuel Conway, the executive director of the convention. But although Conway wasn't willing to give Furry Tales the con stamp of approval, the two say he seemed enthusiastic about the show.

Carter and Medica spent lots of time online in furry communities, getting a feel for furry interactions. (Another source, they acknowledge was "Animal Passions," CP's June 29, 2006, feature story about last year's Anthrocon.) They wanted furry input on specific details and were wary of getting them wrong, with or without the official paw of approval. "You are kind of co-opting their world," says Medica.

But it was ultimately the furries themselves who inspired the show: the cat in the crosswalk nonchalantly batting at a huge ball of yarn on her shoulder, and the fursuiter whose species was not even remotely apparent and who explained, "I'm what happens when magic goes horribly wrong."

"It's really fun," says Medica of the furry parade. "It's like moving theater."