The Full Monty at Carnegie Mellon

It’s just one hell of an evening

When The Full Monty opened on Broadway, in October 2000, it looked as if there would be a Tony Award sweep for this musical version of the popular British film about a group of unemployed steelworkers staging a strip show to raise cash.

Terrence McNally wrote the book — resetting the story in Buffalo, N.Y. — and made sure to stuff the script with abundant humor and heart. David Yazbek supplied the music and lyrics, his score being what you might call an insanely addictive salute to AM radio.

But six months later The Producers opened, and Full Monty lost in every Tony category. 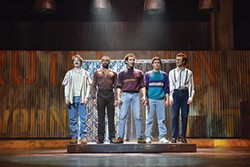 I thought then that Full Monty was robbed, and having just seen the Carnegie Mellon University School of Drama production, I still feel that way. Yazbek’s score is light years beyond the collection of pleasant tunes Mel Brooks wrote and — perhaps heresy here — McNally’s script is funnier than Brooks’, if only because it’s rooted in reality.

A notable feature of that original production is that it made a star out of Patrick Wilson, a Carnegie Mellon graduate. He’s returned to his old stomping grounds to direct this version, and it’s just one hell of an evening.

Not surprisingly, Wilson knows the emotional throughline and does terrific work getting everyone involved in telling the story. This is a fast-paced production showcasing the splendid choreography of Tomé Cousin and Thomas W. Douglas’ precise musical direction.

Nowhere has Wilson done more superb work than in the performances he elicits from his student cast. Nick Sacks plays Jerry, the leader of the gang, with a great sort of Everyman quality that carries us through the show. Michael Leadbetter, Avery Smith, Josh Grosso, Chris Garber and Adam Stern-Rand are the other members of the crew, and each does a tremendous job bringing rock-solid humanity to the roles. (As a plus, Grosso sings with the most glorious voice.)

I especially enjoyed the focus on the women in the cast. Molly Griggs gets all the laugh lines and knocks them out of the park. Erika Olson is both forceful and heartfelt when required, and Amanda Jerry’s a zany onstage explosion.