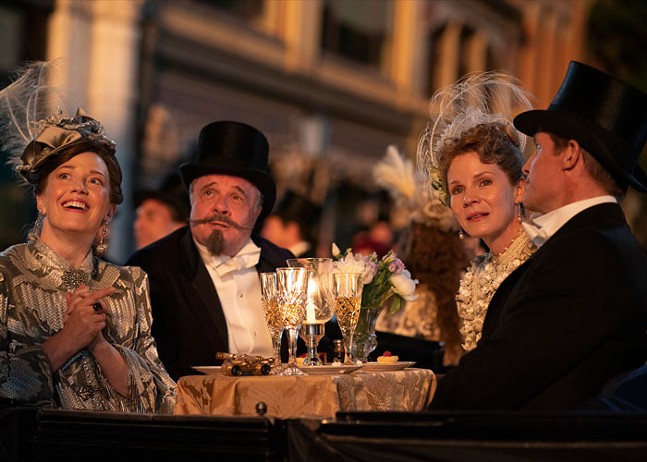 Photo: Courtesy of Alison Cohen Rosa/HBO
The Gilded Age
The Frick Pittsburgh centers many of its art shows, talks, and other programs around the Gilded Age, the period in which its industrialist namesake and his family thrived. It seems only appropriate, then, that Frick staff would be drawn to The Gilded Age, the new hit period drama from HBO. Now fans of the show can get an expert perspective on the show with a new YouTube-based podcast hosted by the Frick.

Viewers can now listen to episodes of The Unofficial Gilded Age After Show, a weekly recap led by Frick education and curatorial staff members. A press release says the show features "expert guests from the fields of fashion, public history, and historic preservation."

Created by Julian Fellowes of Downton Abbey, The Gilded Age is described by HBO as beginning in 1882, with young Marian Brook "moving from rural Pennsylvania to New York City after the death of her father to live with her thoroughly old-money aunts, Agnes van Rhijn and Ada Brook." Marian inadvertently becomes "enmeshed in a social war between one of her aunts, a scion of the old-money set, and her stupendously rich neighbors, a ruthless railroad tycoon and his ambitious wife, George and Bertha Russell."

The Unofficial Gilded Age After Show has been running for six weeks, with the Frick claiming it has garnered "over 60,000 views and counting."

Kaitlyn Clem, marketing and communications associate at the Frick, says HBO's The Gilded Age "represents a unique intersection between the Frick’s institutional identity and mainstream, global media that we couldn’t miss putting our own spin on."

"We hope that viewers of The Unofficial Gilded Age After Show will gain deeper insight into the themes, people, and places represented in The Gilded Age, and that they’ll become part of the conversation surrounding the show in the engaged online community we’ve built on YouTube and on our social media," says Clem.

New episodes of The Unofficial Gilded Age After Show will post each Friday at 9 a.m. on The Frick’s YouTube channel.