For centuries, the art world has relegated women to the passive role of muse, a body to be painted and sculpted. Even today, the representation of female artists in museums still lags, contrary to cultural institutions’ claims to care about addressing the problem. One study by Artnet showed that, between 2008 and 2018, only 11% of art acquired for permanent museum collections was by women.

To some degree, the Frick Art Museum addresses this issue by featuring Maker & Muse: Women and Early Twentieth Century Art Jewelry, a traveling exhibition organized by the Chicago-based Richard H. Driehaus Museum. Now on view through Sun., May 10, the show examines how women influenced the design of art jewelry, both as consumers and creators throughout the early 1900s.

The more than 200 pieces on display range from large and ornate to more understated pieces and decorative accessories like keepsake boxes and tableware. While Maker & Muse touches on a variety of influential designers, guilds, and companies, there's an emphasis on heavy-hitters like Louis Comfort Tiffany, who, of course, made more than just lamps.

The show is split into five different regions and eras of art jewelry in the decades before machines took over and churned out mass-produced baubles. The Arts and Crafts movement of Britain, which spanned the late-1800s and early-1900s, highlights some of the most notable female craftswomen, including Charlotte Newman, an English jeweler who designed under the title Mrs. Newman. The three Newman pieces – a brooch, a cameo of Mary Queen of Scots, and an aquamarine statement necklace – demonstrates her eclectic style and versatility. Following in the footsteps of Newman are Sybil Dunlop and Dorrie Nossiter, two female jewelers who owned separate shops in London around the same time.

From there, the show spans Europe and the U.S., from the linear, symmetrical style of the German and Austrian Jugendstil movement and the Viennese Wiener Werkstätte, to more fanciful work such as a mermaid brooch by Karl Rothmüller and a pendant by Henry Charles Barker that’s more concerned with depicting an ornately detailed galleon than with whether or not anyone could, or would actually wear it. 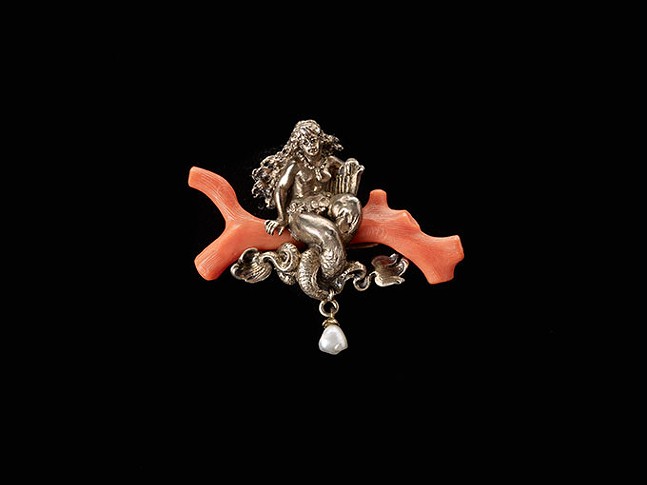 While the female form appears in various pieces throughout the show, the “muse” part is most prominent in the French Art Nouveau portion. Here, women, often in diaphanous garments, dance atop stick pins or on brooches, or peer coquettishly from the front of a cigarette case. A study in contrasts, the pieces were inspired by women working in the few then-disreputable careers available to them, including sex workers, dancers, and actresses like the famed Sarah Bernhardt, while also being incredibly expensive, meaning they were only available to the wealthiest women of high society.

It's interesting to note how this limited view of women bumps up against the show's many female craftspeople, some of whom were self-taught. After wallowing in male gaze, it’s refreshing, then, to move onto the Chicago Arts and Craft movement, which appears more concerned with the natural world as opposed to religious or humanist themes.

Maker & Muse makes for one of the more democratic experiences I've had at an exhibition – there's really no wrong way to enjoy this show. Interested in gawking at sparklers that would make Liz Taylor weep? Feel free, as there are more than enough stunning necklaces, rings, bracelets, and other adornments to catch the eye (the delicate, insect-inspired pieces by René Lalique, Elizabeth Bonte, and Charles Boutet de Monvel are particularly exquisite). 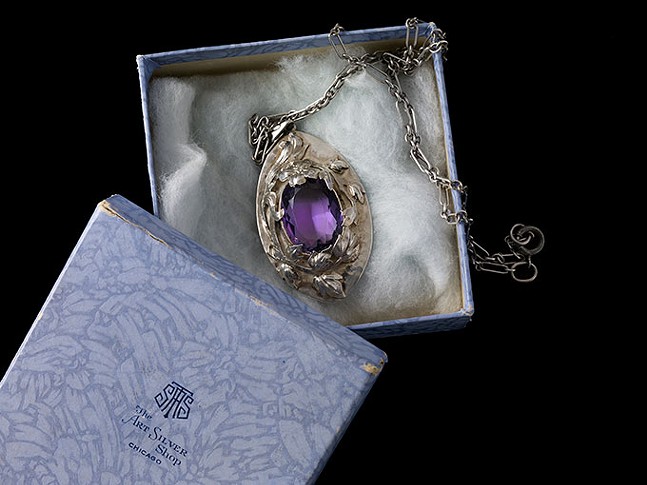 For those more interested in the historical and cultural side, there are laminated informational sheets galore, and optional audio devices with prerecorded content about various pieces. (My one minor complaint is the audio device lacked a headphone jack and, therefore, made me overly self-conscious about annoying other guests.) There are also labels with commentary by local guest artists, musicians, and others, who also contributed pieces for a special Made In Pittsburgh section. (This includes Pittsburgh City Paper columnist Tereneh Idia, who contributed a beaded necklace from her global eco-design company, Idia'Dega).

While you can certainly appreciate all the pretty things at Maker & Muse, it's worth taking a moment to understand the various cultural, economic, and political factors that drove everything from the choice of metal to the color of stone. After all, sometimes the prettiest things have the most complicated histories.