A slim premise and uneven tone drag this romantic comedy into dullsville. 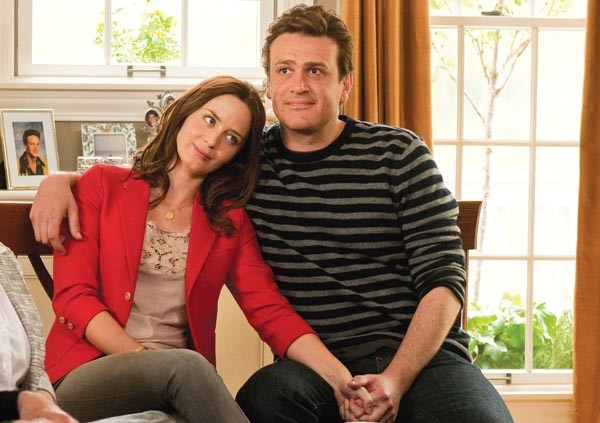 Emily Blunt and Jason Segel, on their very long road to the altar

The title is its own spoiler: In The Five-Year Engagement, chef Tom (Jason Segel) gets engaged to graduate student Violet (Emily Blunt) ... and several years later, still no wedding. Circumstances get in the way: This cute, fun couple must leave cute, fun San Francisco so that Violet can go to school in dreary, dull Michigan. There, they pout, fight, debate metaphors about stale donuts, get re-engaged and so on.

Primarily, Engagement suffers from the same basic problem as director Nicholas Stoller's other two comedies, Forgetting Sarah Marshall and Get Him to the Greek. It's a thinnish idea, s-t-r-e-t-c-h-e-d out. (The film is more than two hours long and it's a good bet you've guessed the ending.)

The padding is evident, whether it's airless stretches with no jokes, the repeating of only mildly amusing jokes, or comic bits that go on past the point of funny. I'm not saying there aren't any laughs, because, you know, some guy getting hit in the balls is never not funny. But the odd bit of slapstick aside, this film drags a lot.

I quickly grew bored by the barely mined set-up about what happens when a couple has to relocate for just one job. Good comedy is born of suffering we can relate to. Having no job, a shitty make-do job or a good job that ruins nearly everything else is surely on the minds of this film's desired demographic. But Engagement fumbles this plot device, even as it relies almost exclusively on it for conflict.

When competent, ambitious chef Tom follows Violet to the University of Michigan, it's never clear why he bottoms out so quickly, turning into a depressive hunter-slacker-sandwich-maker weirdo. (And setting up Ann Arbor as an isolated nowheresville — when it's a thriving town within an hour's drive of a major metropolitan area — smacked of filmmaker's laziness, West Coast snobbery or both.)

The film's other problem is tone: It can't quite decide whether it wants to go for the frisson of life's everyday pain, or exaggerate for maximum laughs. Thus, we're asked to applaud Tom's mature decision to support his fiancée's career, but also expected to guffaw when Tom grows deranged facial hair or is sexually molested with potato salad.

Lastly — and this matters for a successful rom-com — I didn't care what happened to Tom and Violet, or the cookie-cutter characters they spent time with (uptight Asian guy, aging metal-head, pedantic professor, sex-freak chick). Maybe Tom and Violet have to hang around each other for what seems year after less-funny year, but there's no reason we gotta.