Jagr, who’s worn many different uniforms against the Penguins, was always met with boos and even the occasional under-used hiss 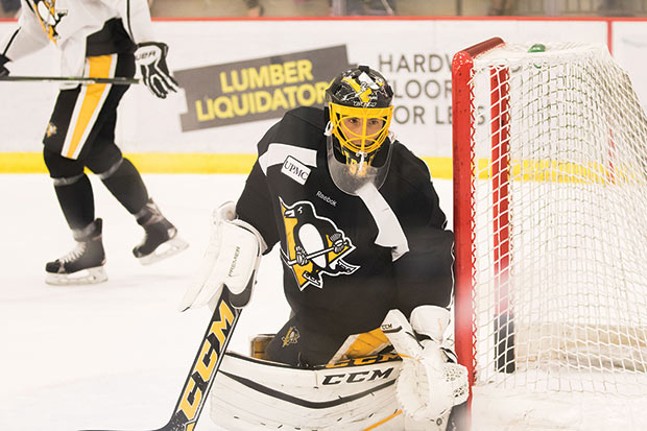 We all know the rules about crying in baseball — you don’t do it.

But there is no such edict in the world of hockey and football. On a night when former Penguins goalie Marc-Andre Fleury returned to Pittsburgh, and Steelers linebacker Ryan Shazier, who suffered a spinal-cord injury in a game last year, stood on his own two feet, even the most grizzled Steel City denizen likely gave in to a round of tears.

Tears for Shazier weren’t surprising. Even a person who didn’t care about sports would celebrate that moment. But the return of Fleury brought emotion because a familiar face was playing in a Las Vegas Golden Knights uniform. Fans who cheered for the young 29er for almost 15 years were in the unenviable position of having to root against him. So, where does the appearance of Fleury in an opposing team’s uniform rank in modern Pittsburgh sports history?

It was odd to see Barry Bonds as a San Francisco Giant, but he left on his own terms and wasn’t exactly embraced (and didn’t win championships), unlike Fleury. Bonds’ departure even cushioned the blow of seeing Bobby Bonilla as a Met and Andy Van Slyke as a Phillie. Same thing with Jaromir Jagr, who’s worn many different uniforms against the Penguins. His returns were met with boos and even the occasional under-used hiss. Since you know we here at Cheap Seats love to list stuff, let’s take a look at the five most jarring incidents of a Pittsburgh sports legend wearing another team’s uniform, ranked from the least devastating to the most.

A Super Bowl champion and one of the best offensive linemen to wear black and gold, seeing Faneca wearing that green jersey was just weird. We took it harder than Plaxico Burress or Santonio Holmes moving to the Big Apple, because we knew they probably wouldn’t stay forever. But we thought Faneca was in for the whole ride. Although I’m sure when he makes it into the Hall of Fame in the next few years, he’ll be going in a Steeler.

4. Rod Woodson as a Baltimore Raven

This one stung a little more, because unlike the others on the list, Woodson was playing for a hated division rival. The greatest Steeler who doesn’t have a Super Bowl ring was past his prime, but you still hated seeing him high five Ray Lewis after a tackle.

The wounds are still fresh as we saw the organization’s all-time best goaltender try to stop Crosby and Malkin from scoring. Even the Fleury haters, who called for his benching every time he had a bad game, seemed to admit they were wrong and gave The Flower his proper respect. It was even hard to completely enjoy the Penguins win.

It technically hasn’t happened yet, but brace yourselves for impact. In May, Cutch will return to the PNC outfield hoping to lower the Jolly Roger. It’ll be odd to see Gerritt Cole as a Houston Astro, but while we liked Cole, we liked him as more of a friend. We loved Andrew McCutchen and still do. Every time Kyle Crick gives up a walk or allows an inherited runner to score, we will be reminded that this is what we got in exchange for a legend.

1. Franco Harris as a Seattle Seahawk

Nearly 40 years after it happened, it still seems unreal. Hall of Famer Franco Harris’ Immaculate Reception was the exact turning point of the Steelers conversion from losers to winners. Seeing Franco in a Seahawks uniform was equally, if not more, shocking than 49ers fans seeing Joe Montana as a Chief, or Giants fans seeing Willie Mays in a Mets jersey, or the entire nation of Canada watching Wayne Gretzky put on an L.A. Kings sweater. It was unthinkable to realize that Franco’s Italian Army would have to transfer their post on the Confluence to the banks of the Puget Sound. At the time, the Seahawks were still expansion chumps, and Harris only played eight games. Perhaps it’s best if we pretend it never happened.