The Female of the Species

The Female of the Species plays with issues of gender and generational disputes with a wicked sense of humor and a good hand at farce. 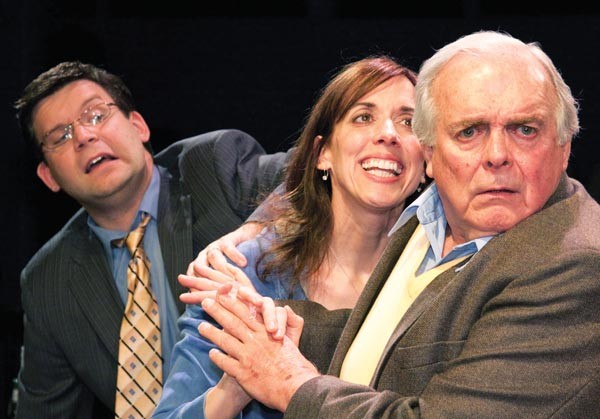 THE FEMALE OF THE SPECIES

Usually an "adult language advisory" outside a theater portends mainly extensive dependence upon obscenities. But, by golly, at the Little Lake Theatre Co. production of Joanna Murray-Smith's The Female of the Species, there is actual grown-up talk. Oh, sure, there's the F-word and such, but also extensive name-dropping of real late-20th-century intellectuals, and masticating their philosophies and hypotheses. Oh, and it's funny.

The 2006 Australian comedy provides plenty of scenery-chewing opportunities, especially for its actresses, a situation well exploited by director Art DeConciliis and his cast. The unlikely plot is inspired by the real-life attack in 2000 by a student/stalker upon Aussie author Germaine Greer. (Greer is probably best known for her 1970 feminist treatise The Female Eunuch, though her oeuvre ranges from art history to anarchy to aboriginal rights.) In Female, the home invasion becomes a farce with the intervention and participation of characters wracked with various existential issues of life, guilt, blame and large doses of narcissism.

The biggest dose is served by Arlene Merryman, as the one-note know-it-all at the center of everyone else's anger and angst. Mary Liz Meyer, as her wild-eyed adult daughter, a fugitive from young motherhood, chomps most heartily on the set (a lovely creation by resident designer Martha Bell, who had less becoming results with the costumes). Brian Edward Leach quickly and comedically switches gears (among other things) as the trying-to-be-understanding hubby. Also notable are Danette Pemberton as the homicidal dropout, Dave James as the anxious but unctuous publisher, and Alex Blair as the cabbie wrestling with Freud's eternal question, "What do women really want?"

A good time, for one. Though not entirely a satire on "second wave" feminism, The Female of the Species does play with issues of gender and generational disputes — not to say "wars" — with a wicked sense of humor and a good hand at farce. Just go to laugh, and duck the shrapnel.