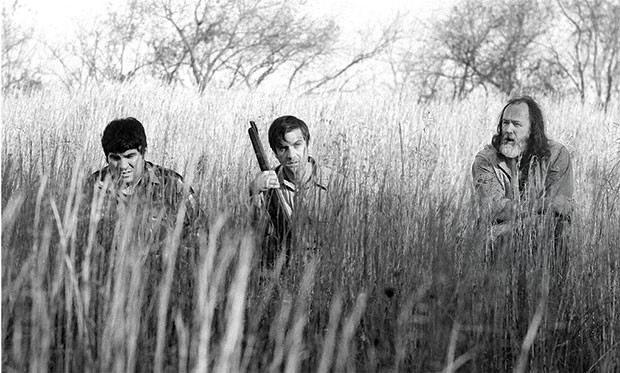 The monthly series for local and independent artists presents a rare feature-length offering, John Jaquish’s The Mutineer (2016). This darkly comic fiction concerns a rural white guy leading a small band that, following a standoff with police, seizes a farm and attempts to found its own country. Though the mutiny’s only opposition is a relatively sympathetic sheriff and his two deputies — this is a decidedly small-bore secession — Lowell (Harris Doran) and his crew of misfit dudes never stand a chance: Most of the film is spent anatomizing their dysfunction and inevitable dissolution as a unit. A greasy-haired Doran is solid in the lead role as a man in over his head, and The Mutineer looks great: Pittsburgh-based Jaquish shot it mostly in West Virginia, on 35 mm film, in luminous black-and-white, with an alternately wry and lyrical eye that at times recalls Jim Jarmusch. Still, a story about armed white secessionists (they even fashion their own flag) reads more problematically today than it might have a couple years ago, taking some of the fun out of things. Jaquish will attend the Sept. 12 Film Kitchen for a post-screening Q&A.