The Fantasticks at Pittsburgh Public Theater 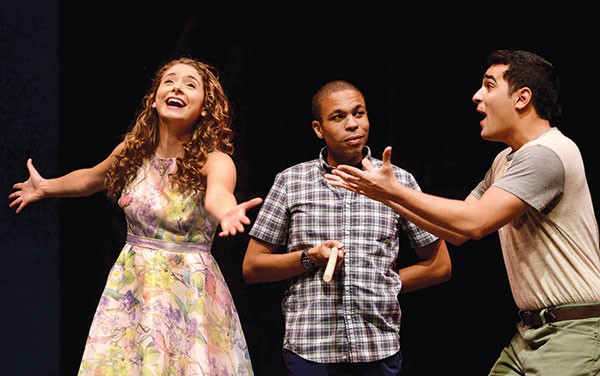 continues through Oct. 30. Pittsburgh Public Theater, 621 Penn Ave., Downtown. $15.75-66. 412-316-1600 or ppt.org
Try to remember a time in September when The Fantasticks wasn’t playing somewhere in the world. To do that, you’d have to go back to 1960, when the show began its 42-year Off-Broadway run. The Pittsburgh Public Theater weighs in with its own version, directed and choreographed with grace and dispatch by Ted Pappas, with precise musical direction from Douglas Levine.

It’s very easy to be bitchy about this intimate musical which has been performed, at least twice, by every theater in the Pittsburgh area. With music by Harvey Schmidt and book and lyrics by Tom Jones, this purposefully tiny show could, to the unfeeling, seem quaint and corny.

But I happen to enjoy The Fantasticks (which, considering how many times I’ve sat through it, is lucky). Schmidt and Jones employ a style which has become, in the ensuing years, timeless. And to rout out any trace of quaint corniness, they’ve perfumed the show with melancholy and a certain bittersweet yearning.

Two young kids are tricked into falling in love when their fathers pretend to feud and build a wall between their houses. (Nothing is more appealing than the thing we can’t have.) They hire a traveling band of players to stage an abduction of the girl … with the goal of making the boy seem like a hero when he rescues her. Complications arise when the romance of love curdles into the reality of love and everyone learns that life is both the light and the dark.

It’s a lovely cast of engaging performers at the Public. Jamen Nanthakumar and Mary Elizabeth Drake are so cute as the lovers you wanna hang them on a Christmas tree. Gavan Pamer and Daniel Krell get their laughs as the duplicitous dads, while Josh Powell, Noble Shropshire, Tony Bingham and Jason Shavers bring fun and texture in assorted roles.

I didn’t get, however, why everyone was pushing so hard. The Fantasticks is absolutely a show designed to slowly, almost imperceptibly bewitch you. This production’s got a little too much manufactured “musical theater” pizzazz going on. But if the worst thing you can say is that everyone’s too professional, that’s really not all that bad.