The End of the World as We Know it

A conversation with CMU grad and video-game developer Neil Druckmann on the revolutionary, The Last of Us 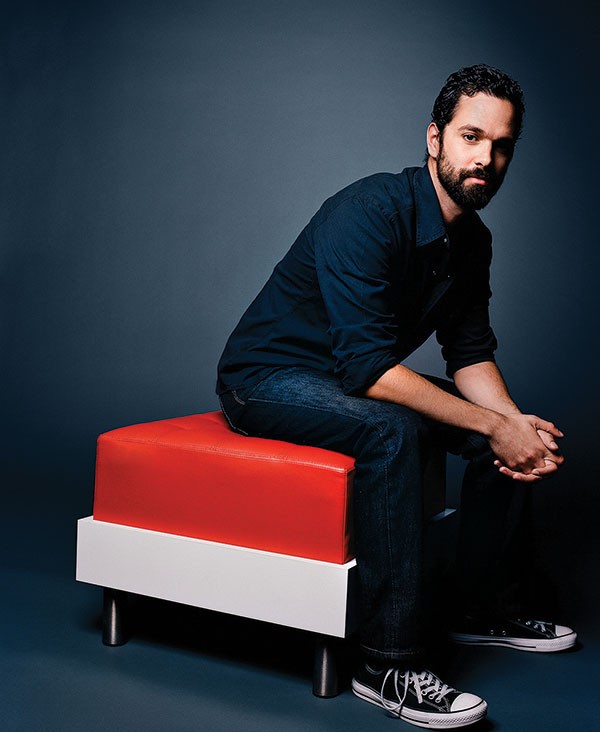 As a student of Carnegie Mellon University's Education Technology Center, Neil Druckmann was taken in by the city's history and architecture. Now eight years later, as creative director for Naughty Dog games Druckmann has created homage to the Steel City in the post-apocalyptic Playstation 3 game, The Last of Us. Druckmann, who received his Master's Degree from the ETC in 2005, is the creative director for The Last of Us and was responsible for crafting the intricate story as well as directing the live-action characters whose voices and actions were transferred into the game. The game – which sold 1.3 million copies in its first week -- features the cross-country journey of a man named Joel and the 16-year-old girl he is paid to protect and transport through a world that has been decimated by a mutant infection caused by the cordyceps fungus. Their journey brings them to Pittsburgh where they encounter kill-crazy infected humans as well as uninfected survivors known as hunters.  (A full review and synopsis of the game can be found on Page 6.) City Paper sat down with Druckmann to talk about the game, the city's role in it and why Pittsburgh always seems to be a great place to ride out the apocalypse.

Of all the things this game is, it is first and foremost the story Joel and Ellie. What was the original inspiration for this game and these characters?

Bruce Straley, the game director and I had just finished Uncharted 2 and were brainstorming a bunch of game ideas. We wanted to base a game around the relationship of two characters and the bond they build. Everything – the actions between the two characters, the music and the dialog – is based on this relationship. One of them is a hardened survivor who has done horrible things to survive in this world and the other is a teenage girl, while not innocent, she definitely has a much more optimistic view of the world.

Normally when games go for that post-apocalyptic feel it' s a lot of browns and grays, but this world is lush, green and beautiful. Where did that vision come from?

We came up with the idea while watching the [BBC television series] Planet Earth. We learned about this fungus called cordyceps and what's intriguing about the fungus is it burrows into the minds of insects, like ants, and causes them to do weird things. The fungus takes over and they eventually will crawl up to the top of a blade of grass, attach itself and the fungus will then grow out of its head, the wind carries it and it then infects other ants. We saw this and we were like, zombie ants! Why has no one used this before! So the world we've created is an interesting contrast. It's very lush and green and also super creepy. You see a street that's usually bustling with people but now it's flooded. It's a gorgeous picture but you can't help but think about death. It's nature reclaiming its domain.

This game forces the player to address a lot of moral and ethical issues and a lot of those are based on the lengths Joel is willing to go to in order to protect Ellie.

Right, that' s one of the main questions the game raises – is the life of one person more important than 10 lives or potentially millions of lives? Does the end justify the means? In this game you will encounter groups of people who are handling the infection and the lack of supplies in different ways. In the beginning of the game Joel and Ellie live in a quarantined military zone where their freedoms have been taken away and draconian laws involving curfews and ration cards are enforced to create some sort of safety. It's safe, but it's oppressive. Then when they get to Pittsburgh they enter a city with a serious supply shortage that has been set up like a giant trap – by a group known as Hunters-- to funnel people in so they can be killed and their supplies taken. For the Hunters, that's what they have to do to survive. As you play this game, the stakes are raised higher and higher and for Joel and Ellie, they form a father-daughter bond that by the end is tested by the sacrifices and the choices that must be made.

Pittsburgh is featured prominently in this game, what was it about this city in particular that made you think it has to be included?

It' s got this interesting mix of old-style buildings and new-style buildings that we knew would make a great backdrop. We also wanted to create a little homage to George Romero and his Night of the Living Dead film that was shot in Pittsburgh. I also know a little about the city thanks to my time spent at Carnegie Mellon.

What went into the city's design?

When you're putting a city like this into a game, you want to find out what the unique characteristics of the city are and include them, but at the same time you don't want to be a slave to the map either. You want landmarks like the rivers and the bridges so people will say, "Oh yeah, that's Pittsburgh," but you also have to have a layout that's conducive to the flow of game play. We loved the look of the downtown business district so you want to make sure you capture a feel – how the street signs look, for example – rather than create an exact replica.

Pittsburgh has long been featured as the backdrop for post-apocalyptic games and films – From Night of the living Dead and The Road to Fallout 3 and now The Last of Us. What is it about our city that makes it perfect for this kind of project?

"I think there is just a certain feel to the city. When I lived there I noticed, it's not a fancy looking city but it has a lot of character. It has theaters, and museums and universities, but at the same time it's a blue-collar, working-class town. And then when winter comes, it does feel a little oppressive and gray. Put a little vegetation on top of it and I think it really turned out beautifully in the game.

I' ve read a lot about this game' s advanced Artificial Intelligence (AI) control of both your enemies and your in-game companion Ellie. What sort of experience can gamers expect from that innovation?

What we wanted to capture with the AI is the sense that you're playing against other people.  We didn't want your enemies to simply stand up and march forward to be picked off. If they feel they have the upper hand, they may march at you. If they see you have a gun, they'll yell to each other to take cover. You can watch them disperse and one guy may run left and try to find a position to ambush you later.  We built an all-new AI system for this game and it extends to your ally, Ellie, as well as your enemies. If you're stealthing around, she stealths with you. She helps you if someone is rushing you from behind, she'll yell "on your left," or she'll hit them with a rock or something and give you a split second to take the advantage. You learn to rely on her and to trust her.

Not initially, no; we wanted to simply tell a great story. But we did want to take that stereotypes you find in a lot of action games – the typical action hero and the weak woman or girl you have to escort and watch over – and flip the stereotype. Joel is a very vulnerable character and Ellie is extremely capable and strong-willed. One of the things you don't see a lot of in this industry is a strong, tough, non-sexualized female character.

Where did Ellie's influences come from?

Many places. For example the actress who plays Ellie, Ashley Johnson, definitely influenced the direction of the character. For example, when Joel and Ellie arrive in Pittsburgh, Ellie is grabbed by a hunter and was supposed to be rescued by Joel right away. Ashley said, "I'm feeling a bit helpless, I feel like Ellie would hit him." So I said, "Then hit him."We also had a lot of women working on this project and I think that very much influenced the character you find in this game.

This industry has long been a boy's club – from the designers making the games to the characters they design. There are more women working in the industry now, do you think that's made a difference?

I think so. If you look on the shelves, you don't see many games with leading women protagonists, so when it comes to gender and race diversity in this industry there's not been a whole lot to look up to. But things are changing and I think it's a chicken-and-an-egg-type scenario. Are there more women working in the industry influencing the products, or is it that there are fewer products focusing on male empowerment fantasies that are inspiring more women to enter the field? Either way, it's changing.

This is a new IP (intellectual property) for Naughty Dog. Do you see it becoming an ongoing series of titles like Uncharted or was the plan to make a one-time unforgettable experience?

When we first started this process, we didn't take anything for granted. Going in I knew that I might never get to make a sequel to this game so it has to stand on its own. I'm not setting up a trilogy or leaving some big cliff hanger. This story starts and finishes with this game. Now, seeing the reception that it's gotten it has certainly become more likely that there will be a sequel. We'll have everyone crunch for six months and come back to the table to meet and discuss ideas for what a possible sequel might be.

You told a well-known industry blog that Joel and Ellie would not be a part of any sequel, so would future games simply take place in this world you've created?

Actually, that's not 100 percent correct and I'm not sure how that got out there but you can set the record straight. What I said was this journey begins and ends. But as far as Joel and Ellie coming back, I don't know. I wouldn't want to tell the same story. For them to come back there would have to be something completely new for them to do. I can tell you that right now there are no good ideas on the table for a new Joel and Ellie storyline, but that doesn't mean there won't be. We've been very passionate about this game for the past three-and-a-half years. Let's see where the future leads.