The only thing better than Richard Keitel's staging is Sean Sears' heart-stopping performance. 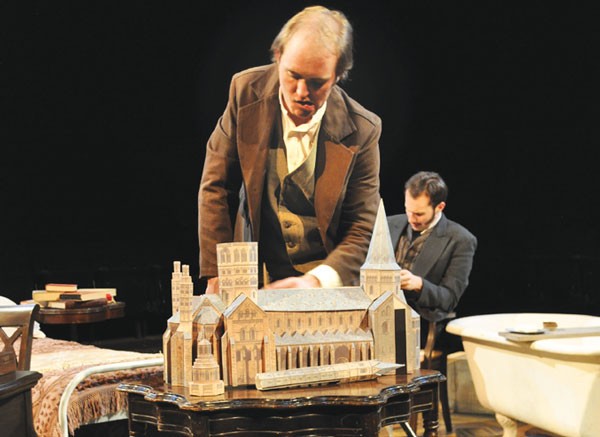 Sean Sears (foreground) and Justin Fortunato in The Elephant Man, at Prime Stage.

In 1981, a young Mark Hamill took the title role of The Elephant Man, by Bernard Pomerance. Hamill was a Star Wars superstar, recognized everywhere as the original Jedi. What would compel Tatooine's finest to play a monstrous, slurring, slobbering sideshow freak? Why would a boyish celebrity trifle with the stage, much less a sad little drama about a Victorian cripple with a giant, disgusting head?

Answer: The role of John Merrick is among the most powerful and demanding in contemporary drama. The actor must wince, cock his head, droop one arm and express all emotion with the other. He must walk like a battered duck. And using Pomerance's words, he must make this creature beautiful — more beautiful, in fact, than most of humanity.

Prime Stage Theatre presents a staggering adaptation of The Elephant Man, and the only thing better than Richard Keitel's staging is Sean Sears' heart-stopping performance as Merrick. By all measure, Sears is the Elephant Man. As in the London premiere, Sears uses no elaborate makeup, only the contortions of his own body. He performs with the innocence and torment that the role deserves. The original lead, Philip Anglim, would be proud, if not jealous.

Be aware that Elephant is a glum and hopeless tragedy, and chuckles are rare. Prime Stage bills itself as family-friendly, and the show is suited for young adults, but Elephant broods and blusters in its existential delirium. If you've ever wondered why a benevolent God would invent a world of endless mortal abuse, well, so does Pomerance — and answers are not forthcoming.

Like Merrick himself, Elephant is hideous on the surface, but bears a handsome soul. As a character, Merrick has become the Hamlet of outliers. His caretaker, Dr. Frederick Treves, means well but is tangled in Victorian mores. His female visitor, Mrs. Kendal, is both an angel and forbidden fruit. Their efforts to help Merrick only contaminate his life. Justin Fortunato and Maggie Ryan excel in these roles; their performances far surpass their years.

You will likely leave the Hazlett exhausted, as Elephant has no intermission. For 100 minutes, you watch the sadness swell. But you might also ask: At what point do you pause a masterpiece?