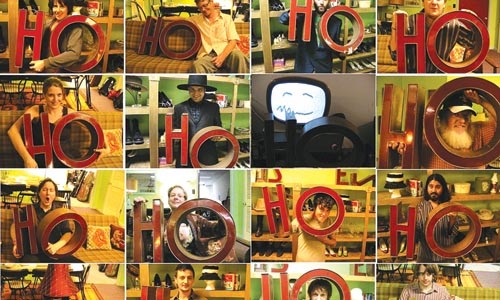 Hailing from Athens, Ga., the loose aggregation of bands known as the Elephant 6 collective produced some of the most eccentrically brilliant underground music of the 20th century's final years. Among them, Neutral Milk Hotel and Olivia Tremor Control combined classic pop with a sometimes surrealist worldview that has yet to be equaled (or expanded upon, since both groups have drifted apart).

Julian Koster, a member of both acts, also had his own project, the Music Tapes, which took an even more eccentric and challenging direction. An expert on the musical saw, banjo and other not-necessarily-rock instruments, Koster sounds like a mutant hybrid of early American folk singers, and a distant cousin to Daniel Johnston. The latter quality comes from Koster's high, sometimes whiny voice, while his antiquated recording techniques -- such as using a 1940s wire recorder -- accounted for the sound. His onstage bandmates included such devices as the Seven-Foot Tall Metronome, which was just what it sounds like.

Music Tapes for Clouds and Tornadoes (2008) is Koster's first album on Merge in nine years. The new release features a choir of singing saws, a pretty sound, if a little eerie. Koster's voice is still an acquired taste but it gets stronger and more passionate as the album proceeds. Simultaneously, he has released an album of Christmas carols, The Singing Saw at Christmastime.

The Elephant 6 Holiday Surprise tour brings Koster together with members of his other bands, and features music from everyone's various projects, and visits Brillobox on Sat., Oct. 18. The evening also includes a screening of Major Organ and the Adding Machine, a much-anticipated film about Elephant 6.