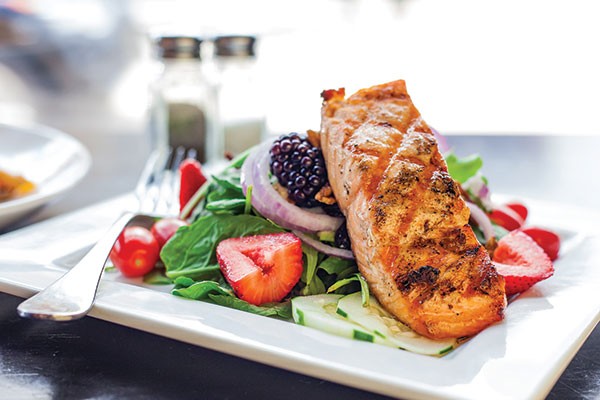 You could be forgiven for feeling a bit of whiplash regarding the 4700 block of Ellsworth Avenue. For half a century, it was home to the Elbow Room, a neighborhood bar that doubled as a place for a not-too-shabby dinner. Then, five or six years ago, the restaurant’s longtime owners shuffled the deck by moving the Elbow Room to Walnut Street. In its old space on Ellsworth, they opened the decidedly trendier Tavern 1947 (named after the Elbow’s year of origin), and in an annex next door, the more casual Bites & Brews. Then the Elbow Room closed … only to be reborn, after a couple more trips around the sun, right back in its old location.

Bites & Brews remains but, for good measure, has just been rebranded, with an all-new menu that includes a throwback to Hotlicks, the barbecue place in the Balcony on Walnut (if you remember that, you’re officially a local). We’ll test the waters there in the future. First, we wanted to see how all this churn had played out at the Elbow Room, one of the East End’s most established establishments.

The first thing we noticed was that it has kept most of Tavern 1947’s dimly cozy decor, including plenty of chalkboard paint and a fetching faux-patina-ed copper wall. The next was that, contrary to last winter’s announcement, chef Darren Smith of the late, lamented Szmidt’s Deli was not in the kitchen. Smith’s approach to house-cured meats and house-made pierogies would have been a perfect fit for the rebirth of the Elbow Room. Instead, the current menu blends new recipes, holdovers from 1947 and Elbow Room classics.

The latter category in particular is a bit of a time capsule, not of the restaurant’s mid-century origins, but of local cuisine circa 1990. “Elbow Room Favorites” are both familiar and a bit fussy, like chicken with apples, onions and cherries with apple-jack brandy. But everything old is new again, and if our visits to several brand-new restaurants are any indication, fussy recipes are having another moment, so perhaps the Elbow Room is right on time. While none of the lengthy list of starters is identified as an Elbow Room Favorite, items like spinach-artichoke dip and crabcake are local classics.

We’d hardly sat down before we ordered a decidedly non-classic dish — gnocchi tots, deep-fried pillows of mashed potatoes. Deep-frying is a reliable pub move, but here the effect was extraordinary, because the gnocchi within their crispy, dark-brown coating were so light, yet substantial. (French fries offered a similar, satisfying contrast between deeply browned exterior and fluffy interior.)  The gnocchi tots were served with a zingy, Thousand Islands-like sauce that Angelique could have eaten with a spoon.

Our other starter, Greek quesadilla, sounded as promising but was much less successful. The filling of vegetables with feta should have worked, but it was a mess. The tortilla wasn’t remotely crisp, and the vegetables — including spinach, cucumber, artichoke, red pepper and olive — formed a soggy, incoherent mishmash that was hard to enjoy even when it wasn’t falling apart.

House-roasted meats, part of the menu of Tavern 1947, have stuck around for the new incarnation of the Elbow Room. The sandwich menu features in-house corned beef and turkey, among a broad range of options from diner staples such as grilled cheese and tuna melt to veggie options and deli-style sandwiches and salmon burgers.

“The GW” sandwich was a well-executed classic combo of turkey, brie and green apples, with not-too-sweet honey mustard on grilled wheat. In “The Earnest” — prosciutto, pulled pork and Swiss cheese — alas, the main flavor was salt. Spicy mustard was a suitable condiment, but chopped, not sliced, pickles were a strange choice.

Mac-and-cheese, a 1947 holdover-turned-contemporary-darling, was available in a couple of forms. The namesake one is basically three-cheese pasta, not that that’s a bad thing: A creamy sauce, soft but not mushy penne, and a blend of cheddar, gruyere and smoked gouda offered a pleasing range of tangy, nutty and milky flavors. A passing plate — or we should say, skillet — of the mac with fried chicken looked too good to pass up, but it was also too good to be true. The massive slab of chicken breast was heavily coated with an herb crust that broke off the meat, which tended towards dryness, especially the thin end of the breast, which was basically jerky.

The new Elbow Room attempts to weave together many strands from its 70-year history. Some are strong, but others need to be reinforced — or set aside.