The Eight Stages of a Golden Shower (Story)

How an unverified, error-ridden document made its rounds through the media

If you're a fan of bombshell breaking news stories, you must be loving life. The presidential election, its result and fallout have produced an unending stream* of controversies, shockers and conspiracies. The bar for what qualifies as "outrageous" seems unbound by the laws of gravity. A new bomb drops before you're able to make sense of the previous one (which, some have noted, might not be wholly accidental). While each story is unique (like a snowflake), there are certain patterns that have emerged in how they play out in the media, particularly online. To get a better grip on how and why these patterns exist, CP mapped out the life of one such big story.

Here's how it starts:

Jan. 10: CNN reports it first. Russia has compromising information about Donald Trump and they're intent on using it. The sources are shaky and the allegations are nothing new, which might explain why CNN got the scoop: they didn't. Many outlets, including the Huffington Post and Mother Jones claim to have been given the same document and held off publishing until it could be confirmed.

But at 5:20 p.m., Buzzfeed publishes the unverified documents, which allege, among other things, that the Kremlin has compromising materials about Donald Trump, and that those alleged materials contain proof that the dude might enjoy the occasional golden shower (which is when you get peed on or pee on your partner in a sexual context).

Buzzfeed
Source type: Liberal-leaning, millennial-driven media powerhouse. Worked its way up from listicles and quizticles to mainstream media status, though this story didn't exactly help that cause. More on that later.
Notable words or word choices: "unverified," "errors"
Headline style: Burying the lead? 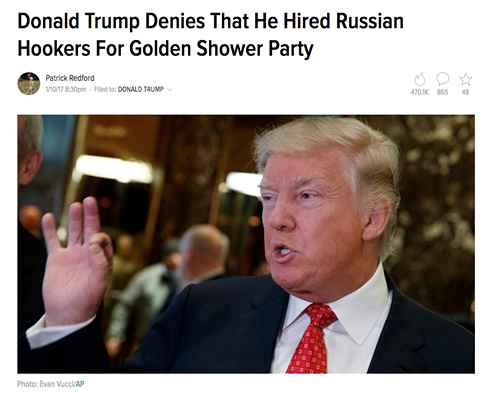 Jan. 10, 8:30 p.m.: A few hours after the story breaks, President Trump takes to Twitter (need a shorthand for that phrase, T4?) to deny the story, which The Concourse reports 11 minutes later.

No surprise there. I wonder if he already had that bad boy saved in drafts. Despite the significance of the story and its sheer cosmic perfection if it turned out to be true, the story is playing out as expected at this point.

Sidenote: Isn't it weird that we use words like "bombshell," "fallout" and "half-life" for describing a breaking story? News is war.

The Concourse
Source type: A grab-bag culture blog from Deadspin (formerly of the Gawker family band). Left-leaning, heavy on aggregate news, high-tolerance for snark. As of this writing, headlines on the site range from insights into the treatment of death row inmates at Angola prison in Louisiana, to "Would You, Personally, Kill Assad?"
Notable words or word choices: They sort of flip the script from Buzzfeed's approach in Stage One, focusing on the pissing in the headline and using the body of the story to acknowledge the gravity of this story, should it be true.
Headline style: The best of both worlds. Good for SEO and clickbait, but the word "denies" is there, so they're covered.

Speaking of SEO, here's a graph of Google searches for the term "golden shower" dating back to the beginning of 2017. Do you see the spike? Jan. 10, 8:53 p.m.: "The jokes write themselves!" ... Not really. Sometimes low-hanging fruit is rotten on the inside. It's the sort of theoretical joke that doesn't make it past the basic algebra of its premise: gold-loving man + golden shower; President starts with a "P," etc ...

Three hours after the story breaks, the "we-know-this-is-serious-but-give-us-a-second-to-laugh-before-we-dig-in" phase begins.

Screenshot from The Daily Beast

If you don't know, 4chan is an online forum where users post mostly anonymously and form subgroups and ... I don't know, share recipes? I know they invented the Rick Roll, so that's something. Either way, it seems pretty unlikely that they tricked Buzzfeed into reporting a false story (though if you load up your search terms in favor of that narrative, you're sure to find what you're looking for, top result notwithstanding).

This aspect of the story has pretty much died since then, though the controversy over Buzzfeed's decision to publish the documents remains.

The Daily Beast
Source Type: Online-only publication focusing on pop culture and politics. Left-leaning. Not without its own share of controversies.
Notable words or word choices: "claims," "weak stream"
Headline style: The SEO+clickbait+playing it safe approach 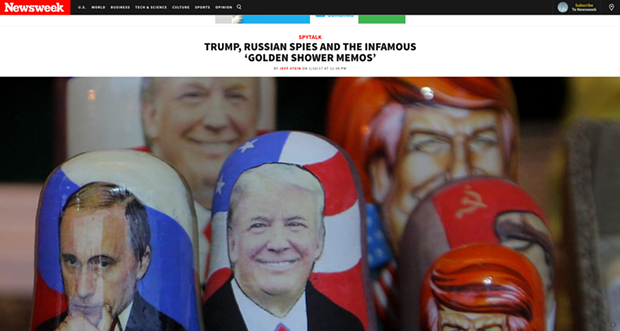 Newsweek seemed to have this piece locked and loaded, which isn't surprising since the potential existence of this information was known long before Buzzfeed's release. Is this an instance of Newsweek getting scooped? Or of an overzealous young media company jumping the gun? Public opinion seems to favor the latter.

Newsweek
Source Type: In print since 1933, illustrious, liberal-leaning (though far less than others).
Notable words or word choices: Not much in word choice, but it's interesting that older print media seem more interested than new media in dissecting the phenomenon of "fake news," since they ostensibly see themselves on the right side of that term.
Headline style: "Here's some context"

Jan. 11, 11:57 a.m.: Day 2 in Urinetown. The story is everywhere. Buzzfeed is getting dragged through the mud. Heroic thinkpieces are soaring through cyberspace. Conservatives snicker at the left grasping for straws; liberals pray this is the big one. And a Gizmodo writer named Bryan Menegus writes this wonderful story about Trump's purchase of an actual golden shower back in 2007 (though to be fair, it's actually a golden shower-head). I know this is insignificant in the scheme of things, but let's just take a second to enjoy this headline/photo combo. You can watch the guy's video here.

Jan. 12: Day Three. This is where things get interesting. As noted above, Buzzfeed conceded that the information was unchecked and that it should be taken as such, but many, including the New York Times, Breitbart, Fox News and the BBC, (screenshots of the latter two above) felt they rushed to publish an incomplete piece of reporting for the sake of traffic.

For his part, Buzzfeed Editor-In-Chief Ben Smith's response oddly took a page from Trump's book of wiretapping claims, with an argument boiling down to "I don't know if this is true, but wouldn't that be something ... if it were?"

And as with Newsweek, the elder press corps took the opportunity to tsk tsk the snotty youngsters for shooting from the waist (Ben Smith is 41, by the way).

In the above examples, the BBC dives deep into the ethical questions behind publishing that story, why they pulled the trigger, and whether they should have. There's also some great insight into internet journalism's effect on how we identify legitimacy and truth in reporting.

Fox News' Howard Kurtz spent his op-ed explaining why he wouldn't have done anything the way Smith did. His tone is far less glib than you'd expect, though he does close the article mentioning that other headlines from Buzzfeed that day included “How Bitchy Is Your Resting Face?" and ”Would you get rid of your phone just to have an orgasm?” (My answers: not particularly, probably not?)

Fox News
Source Type: Right-leaning. TV news.
Notable words or word choices: "As a reporter, I’ve heard all manner of rumors, unproven conspriacies [sic] and salacious crap over the years. I would never dream of publishing them without rock-solid confirmation."
Headline style: "This is the way it is. Now that I've established that fact, here's why it is."

March 2, 6:30 p.m.: And here we are. The more salacious aspects of the story died down. Public opinion, even among liberals, concedes that there's probably no peepee Trump tape. But there's no way this story is over. We're still watching it play out, which illustrates the weird pickle it is to be an American news consumer in 2017. Every day brings a shitstorm bigger than the day before, and yet it feels like we're running in place.

To wit: As I wrote this (April 3), the Washington Post reported another development in the Trump-Russia connection ("Blackwater founder held secret Seychelles meeting to establish Trump-Putin back channel"). I'm not going to go through all the stages again for this story (screenshotting makes me sleepy), but it's another story that calls for patience, attention and media literacy, for lack of a better term.

In this issue on that topic, CP's Bill O'Driscoll wrote about the need to slow down a news story, to wait for more details to emerge, to let the dust settle. He's a very smart dude. But if we've learned anything this election cycle, there's always more dust.

Trudging through the partisan politics, confirmation biases, rushes to judgment and self-interests involved in the relationship between media and government is fucking exhausting. But recognizing patterns in how a story plays out in the media is a good way to keep context on a chaotic atmosphere that abhors context. All stories don't follow these stages to a tee, but I'd like to think the core motivations of modern media outlets are all on display here.

So when the next bombshell hits your newsfeed — soon, probably — try to keep an eye on how the headlines, angles and wording change over time; do your best to make sense of it, then wait for the dust to settle.