The Domesticity of Abandonment explores dispossessed people and objects 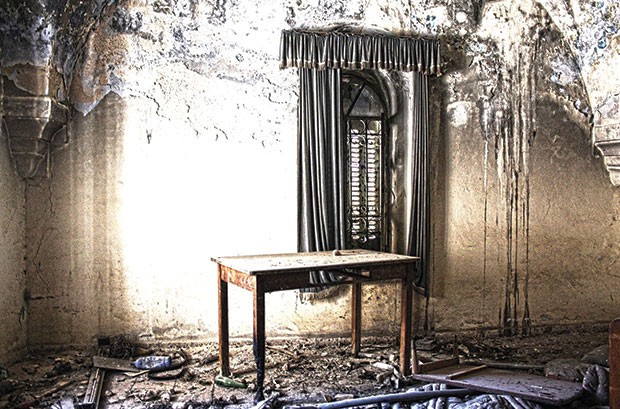 Photo of an abandoned home by Palestinian artist Bashar Alhroub

THE DOMESTICITY OF ABANDONMENT

continues through Jan. 29. SPACE, 812 Liberty Ave., Downtown. 412-325-7723 or spacepittsburgh.org
“Abandonment” describes a human attitude toward other humans, or human creations: No one laments an abandoned forest or an abandoned desert. The Domesticity of Abandonment, a group show at SPACE gallery, explores both abandoned artifacts and abandoned people.

Carolina Loyola-Garcia, guest-curating for SPACE, says the theme is how abandonment, defined broadly, affects people’s everyday lives. Among the 15 participating artists, who range from locally to internationally based, two chose strikingly similar artifacts. For “516 Sampsonia Way,” Pittsburgh’s Rose Clancy scavenged a vacant North Side lot, then created, from scrap wood, a cabinet; rotate its crude wooden peg to turn a belt inside adorned with finds like keys, and plastic detritus from toys to novelty items — literal trash that might or might not have meant something to someone, at some time, but whose abandonment makes it somehow poignant all the same. A metaphorical cabinet, Cyprus-based Aysu Arsoy’s “The Cabinet of Lost Memories,” showcases artifacts once owned by residents of a town in that former British colony that was looted during the 1974 Turkish invasion. The town was abandoned — just as the objects themselves later were by the looters. The twice-forsaken glass marbles, toy cars, rubber duck, and shattered teacups and saucers litter the sand in two installations and 21 photos.

Yet it’s more wrenching still to see whole houses discarded, as in Palestinian artist Bashar Alhroub’s two dozen photos of homes fled for economic or political reasons over decades of expulsions, displacements and other upheavals. The myriad of household goods left behind in those buildings echoes Dragana Crnjak’s “Home,” a starkly powerful wall drawing of a dining room table, its chairs scattered, two on their sides; Crnjak fled Bosnia in 1997, during civil war, and writes that the “image of an abandoned dining room haunts my mind.” Alhroub also contributes “Gateway to Heaven,” a desperate and despairing short video in which a point-of-view camera frantically winds through seemingly endless alleyways to dramatize the plight of stateless refugees, Palestinians who pine for an increasingly mythical homeland from which earlier generations were expelled. 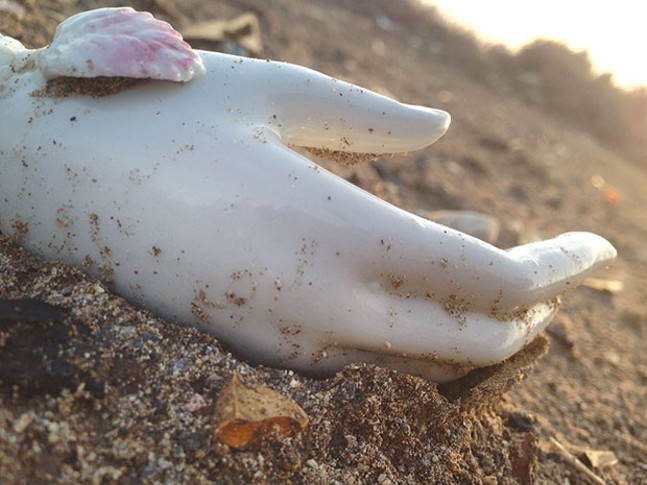 Photo from Aysu Arsoy’s “The Cabinet of Lost Memories”

Alhroub’s abandoned houses are more or less intact. Not so the structures in Susanne Slavick’s series of five appropriated photos of bomb-broken buildings in places like Iraq and Lebanon. Slavick amends the photos with images taken from traditional Muslim art — animals, architectural details — and superimposed to recall the history and culture of these shattered places.

The West has its own brand of abandoned buildings. “Belshazzar’s Feast,” a photo installation by Deborah Hoskings, highlights graffiti on such structures in Pittsburgh (the title references the Old Testament’s prophesying “writing on the wall” story). But other subject matter also connects, such as the wrought-iron lawn furniture that sits in an overgrown yard as if still awaiting its tea party. Stephen Grebinski’s installations “Arena One” and “Arena Two” document a former home-away-from-home for some of Pittsburgh’s gay community: Uptown’s now-demolished Arena Health Club, a bathhouse Grebinski memorialized with architectural artifacts and video loops of salvaged VHS footage (depicting scenes including a beefcake photo shoot).

Then there are homes abandoned before they were even lived in. Christine Holtz’s “Ard an Oir” series documents one of the more than 2,000 housing developments left uncompleted in Ireland after the 2008 global financial crisis. The ironic residue of a burst housing bubble includes a colorful “Showhouse Now Open” poster for this “exclusive development.”

On the hopeful side is “A Quiet Declaration,” Joey Behrens’ photo documentation of his project to artfully reclaim an abandoned space next to his own Wilkinsburg home.

Our feelings toward abandoned objects or buildings might be as strong as anger or, depending on circumstances, as mild as a certain wistfulness. But what happens when places (or institutions) abandon their people? Right in our backyard, Nicholas Childers’ ongoing project Steel in Distress sounds out laborers like the United Steelworkers members who for six months were locked out by Allegheny Technologies Inc., which sought contract concessions including reduced health benefits. In photos and a short video, Childers bears witness to these workers displaced in place — including the makeshift shelters they built outside ATI factories.

The international refugee crisis is one of the world’s biggest news stories and political issues. As noted in text for Andrew Ellis Johnson and Susanne Slavick’s “Resort,” nearly 4,000 refugees died last year attempting to cross the Mediterranean Sea; their video loop succinctly demarcates the gulf between those who view bodies of water as sites of leisure and those who must navigate them to survive.

Refugees in similar straits get faces and names in “Echoless Refuge.” Algerian journalist Oualid Khelifi contributes 27 striking, even iconic black-and-white photos of a few of the millions of Africans who, with little media attention, have been displaced by warfare and other strife from places like the Central African Republic, Djibouti and Somalia. Khelifi notes that despite the howls of nativists the world over, the vast majority of refugees end up not in the West, but in the developing world — people like Hosna, a Sudanese woman who attends school with her daughter as a refugee in Chad, and Adam, a farmer who fled his native Darfur for Chad a decade ago, and whom Khelifi makes resemble a figure out of an Eisenstein film.

Abandonment can lead to sanctuary. Cigden Slankard’s three-channel video “Cultivation” finds Somali-Bantu, Bhutanese, Burundi and Congolese refugees living in rural New Hampshire, resettled as part of the New American Sustainable Agriculture Project. The scenes range from stark winter landscapes to the high green of summer, from seed to farmers’ market, and from the refugees’ talk of war and repression to one woman saying, of farming, “It’s almost like you are doing an exchange of the soil with you.” Immigrants (not necessarily refugees) are also recognized in “Immigrant Body in Translation.” Maritza Mosquera’s interview project about people coming to and leaving the U.S. includes big quilt-like grids of silk-screened photo portraits.

Viewed clockwise, The Domesticity of Abandonment concludes with “In the News,” T. Foley’s series of paper sculptures painstakingly fashioned from photos cut from the front sections of the Wall Street Journal and New York Times, all in wall-mounted, heat-sealed, transparent vinyl boxes. The idea is “to highlight the ephemerality of newsprint and the 24-hour news cycle.” The dynamism of these delicate, typically 3-D figures, like miniature dioramas, honor both the original photographers and Foley’s eye. Most explicitly on theme is a photo of refugees marching, left to right, along a ridge in low light, the newsprint voided in the shape of the silhouette of a young man in an athletic pose, perhaps a skateboarder, his seeming freedom or exuberance ringing ironic.