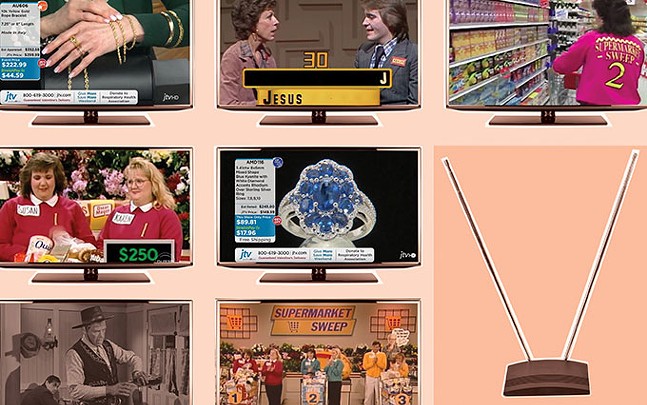 The best part about the streaming era of TV and movies is that there is always something to watch. The phrase "there's nothing on TV" no longer applies. But the worst part about the streaming era is all the decision-making. I have to choose the streaming app and genre of thing to watch, and then sift through thousands of options. I often get too tired by the scroll and just watch an episode of House Hunters (streaming on Hulu). Over the holidays, a friend gave me an antenna to hook up to my TV.

Like most young adults, I don't have cable and probably never will again, because it's way too expensive (unlike streaming services, which are free because I use various family members' passwords). But I grew up with cable and there are parts of it I miss greatly, like watching important events live (award shows, Olympics). But mostly, I miss being able to plop on the couch, turn on the TV, and let the higher powers choose my path. Sometimes, I don't want to watch something because everyone else is watching it or because I read an article about it or because the Netflix algorithm told me to.

Buying a basic cable antenna feels like cheating. It's $20 and you just plug it into the TV and immediately start getting TV. It comes with familiar channels like ABC and NBC, but also a whole slew of channels that, up until recently, I did not know existed, and whose purpose is not entirely clear.

There's of course QVC and HSN, but then there's also JTV (Jewelry Television). The channel Grit (slogan: "television with backbone") shows old cowboy movies. Buzzr, a self-described "pop culture time capsule" exclusively shows old game shows, mostly from the '70s-‘90s, like Supermarket Sweep, Card Shark, and Password. The products and prizes on these game shows feature outdated or discontinued brands — like a luggage set, a "color TV," a mattress pad called Ultra Pad — so it doesn't feel like I'm willingly consuming a long-form advertisement. It's the same joy I get out of flipping through old magazines and seeing ads for healthy cigarettes and douches for women.

Another channel called Decades — which has the slogan "Relive. Remember. Relate." — shows, you guessed it, stuff from decades past. It could be an episode of The Dick Cavett Show with stuntman Evel Knievel and jazz musician Dizzy Gillespie as guests. Or it could be a show called Through the Decades, simultaneously including information about the impeachment of former Illinois governor Rod Blagojevich, the year Tetris came to the U.S., and a celebration of Oprah Winfrey's birthday.

I am not the target audience for these auxiliary channels, or probably even this antenna. I know this partly because of the programming, but also because of the commercials. There are frequent ads for different brands of machines that clean sleeping equipment. One is for a 2020 election-themed chess set that your family can "cherish for generations," complete with Trump and Pence pieces, and two empty podiums for the still-undecided democratic nominee.

The height of the streaming era combined with TV turning into a prestige medium made for a lot of “must-watch” shows. But watching Buzzr on a $20 antenna is the opposite of must-watch TV. There is nothing to keep up with, nothing to trap you in a binge-watching prison, there’s not even a way to stalk the game show contestants online afterwards, the way you can with people on House Hunters or Chopped. These are shows that live in the Twilight Zone of TV-watching, completely of another time and place and format of viewing. None of it matters, and it’s the perfect escape from everything else that does.