The Diary of Anne Frank at the Public

THE DIARY OF ANNE FRANK 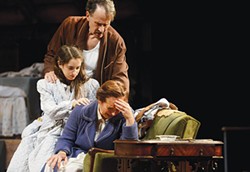 Pittsburgh Public Theater’s production of The Diary of Anne Frank is top-notch. Every performer has captured the nuances and subtleties of all the characters in this 1955 play about one girl’s experience of the Holocaust. Remy Zaken, beguiling and luminous, gives a noble performance as Anne: extroverted and curious one moment, then, by Act II, self-questioning about her stirring sexuality and fearful of the dark shadows that loom.

The show’s core is the nurturing relationship between daughter and father; as Otto Frank, Randy Kovitz is riveting, giving a performance of heartfelt tenderness. Pamela Berlin’s direction fills every movement with significance; she’s smart enough not to stand in the way of the players or, more importantly, the power and potency of Anne’s words.

The play, mostly based on what was written in the diary Anne’s father gave her for her 13th birthday, never fails to stir the soul. Her first entry: “I hope I will be able to confide everything to you, as I have never been able to confide in anyone, and I hope you will be a great source of comfort and support.”

People often think that Anne and her family, as well as the van Pels family and a dentist friend, hid from the Nazis in an attic. The actual “secret annex” was a three-story space above Otto’s business in Amsterdam; the topmost level was the attic, access to it covered by a bookcase to ensure it remained undiscovered. Michael Schweikardt has done a fine job recreating the space.

When the family was betrayed, and arrested by the Gestapo, they were sent to different concentration camps. Anne and her sister, Margot, were transferred to Bergen-Belsen, where they died of typhus in February 1945, weeks before the camp was liberated. Otto Frank was the only family member to survive.

Yet Anne lives on in every production of her diary, with help from Otto’s musings, all solidified by playwrights Frances Goodrich and Albert Hackett.

One of Anne’s quotes sums up life in 11 words: “Despite everything, I believe that people are really good at heart.”

Over the decades, our loss has become our gain.