The Delta Foundation, one of Pittsburgh's most prominent LGBTQ nonprofits, dissolves 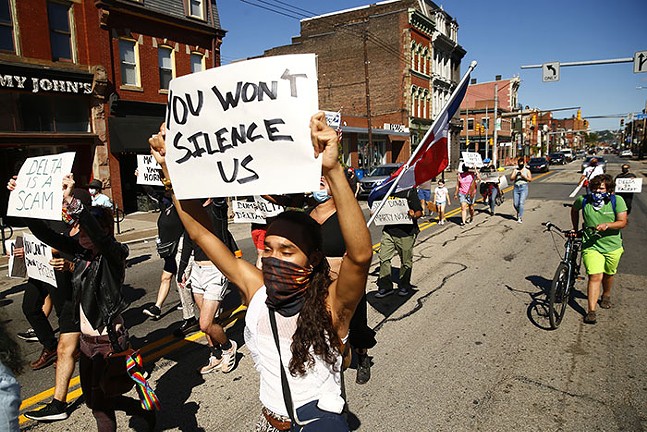 The news came unceremoniously on Sunday via Delta's Facebook page, concluding a legacy of LGBTQ advocacy in the region dating back to 1996. Board president and volunteer Marty Healey attributed the decision to the pandemic-related cancellation of this year's Pittsburgh Pride celebration, which generates around 90% of the organization's annual revenue, according to the post.

"The Board of Directors agreed that the time has come for change,” says Healey. While the news came as a shock to some, many local advocates had already lost faith in Delta after years of controversial actions that many criticized, but anyone with influence over the organization failed to stop.

On Sat., Aug. 19, Black trans activists staged a demonstration in the South Side explicitly calling for Delta to dissolve, claiming that the foundation lacked transparency and discriminated against Black trans people.

The protest was the most recent addition to Delta's troubled history. In January, former Delta board president Gary Van Horn resigned after being charged for forgery and impersonating law enforcement.

In previous years, the foundation received backlash for booking Iggy Azalea, a white rap artist who posted homophobic comments on social media, as well as accepting a sponsorship deal with EQT, an energy company with a record of donating to anti-LGBTQ politicians.

Sue Kerr, founder of the Pittsburgh Lesbian Correspondents blog, says she has been expecting the end of Delta since 2015, when Roots Pride was created in protest of Delta's Pittsburgh Pride. Since then, other alternative Pride events sprang up, including People’s Pride and Pittsburgh Black Pride.

“From my vantage, Delta never recovered from that blow and has been slowly crumbling ever since,” says Kerr.

She claims to have received many reports of Delta's “misdeeds” over the years and believes Van Horn served as a scapegoat for longtime board members and others who are just as responsible for the breakdown of the organization. She cites how donors and other organizations enabled Delta’s racist and exclusionary actions and “then walked away without a second glance.”

“[Delta] has demonstrated over and over who they are, but they were strategic enough to curry favor and consolidate power,” says Kerr. “Their organization is steeped in the worst parts of Pittsburgh — especially their anti-Blackness.”

She believes the community should learn from the mistakes that let Delta persist, and that any investment in LGBTQ organizations should include a review of its bylaws, budgets, and other operations.

Union staff members of the Persad Center, a Lawrenceville-based organization focused on serving Pittsburgh’s LGBTQ and HIV/AIDS communities, responded to Delta’s announcement with a statement saying, “Although it is disappointing to witness an LGBTQ+ organization disband, especially during a time of great need, we stand in solidarity with the activists within the Black and Brown communities who have been long demanding accountability and increased inclusivity from the Delta Foundation and others.”

Persad has been closely tied to Delta since the promotion of Healey, who also serves as director of Persad's board.

The Persad workers, who voted to unionize in December 2019, say one of the reasons they organized with the United Steelworkers is because they “envision a future where we work collaboratively with our clients and the communities in which they live and work” and also “strive to increase diversity in our own organization.”

“Because of this, we hope our staff and leadership continue prioritizing Black and Brown voices who have been at the forefront of the movement and who have been making strides in bringing Pride back to its roots of inclusivity and justice,” says the statement. “Listening to the communities we serve who are calling for equitable leadership within Pittsburgh’s organizations is one way we can do just that.”

“We can’t wait to celebrate all of our community at Pittsburgh Pride 2021,” says a press release that also touted the event as “the most inclusive Pride yet.”