A solid piece of entertainment that lacks the coherent themes and tension to be as provocative and enthralling as fans might have hoped. 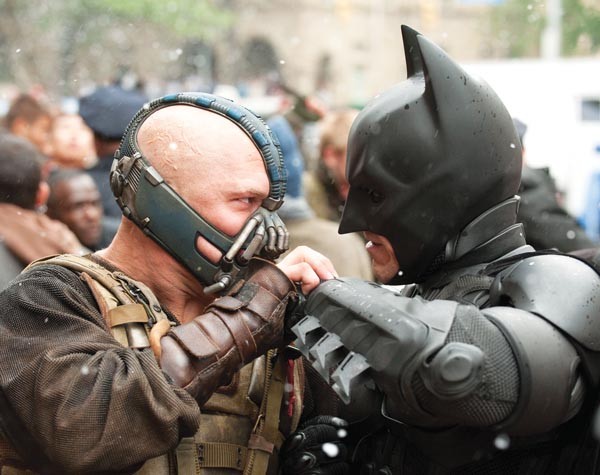 Christopher Nolan's final piece of his ambitious Batman trilogy, The Dark Knight Rises, is certainly an entertaining feature, with reliable actors, sweeping special effects and a slinky new foil in Catwoman. At nearly three hours, you'll get your money's worth of cinematic fun, with attendant riffs on post-9/11 nihilism and anxiety. But viewers may want to temper their expectations: The film is frequently clunky, and its themes muddled.

Eight years after the events of 2008's The Dark Knight, Bruce Wayne (Christian Bale) is in a funk, having retired the Batman persona in disgrace. But he emerges from his pity party after encounters with a thief (Anne Hathaway), an earnest young cop (Joseph Gordon-Levitt) and a clean-energy enthusiast (Marion Cotillard).

But it's the appearance of a new threat — a mercenary named Bane who's attacking cops and stock markets — that rouses the Batman. It gets worse before it gets better, with key characters disabled or imprisoned, and Bane taking Gotham hostage, in a twisted liberation-before-annihilation tactic.

Yet one of the film's disappointments is the Bane character, which buries a good actor, Tom Hardy, behind a mask, and never gels into an intriguing, fearsome villain. Bane is like a bad-guy wrestler turned to crime, and he and Batman mostly engage in fistfights.

An early scene in which Bane escapes a plane looks cool, but it also encapsulates the film's weaknesses: loading up on gimmickry, bombastic music, one-liners and scattershot back stories at the expense of a more focused story we can care about. Characters offer germs of ideas (justice, institutional collapse, restoring hope), but the overstuffed film is juggling so many storylines that finding a central theme is tough. The script flirts with trendy anti-government screeds and class warfare, but can't clarify its sympathies. Do I get behind Bane's army of down-and-outers, the newly "broke" Wayne or citizen looters?

Fans of the trilogy will be heartened by callbacks to the earlier films, and the larger story ties up at the end (while leaving doors open for future blockbusters, just in case). And Pittsburgh gets ample screen time. Bane's two best scenes, where he gives rousing speeches, are set against two local landmarks: Heinz Field and the mighty columns of the Mellon Institute, in Oakland.

These films are adaptations of comics — and much of the dialogue in DKR sounded as if it had a bubble around it — but throughout this series, Nolan has aimed to make larger works of art. With action-hero films, most outcomes are pre-ordained, so the execution of the journey really matters. Dark Knight Rises is a solid piece of entertainment, but it lacks the coherent themes and tension to be as provocative and enthralling as fans might have hoped.