The curtain rises on City Theater's Louder Faster, Prime Stage's Antigone and a new touring version of West Side Story.

By Bill O'Driscoll and Lucy Steigerwald

What if George S. Kaufman got stuck in one of his own plays? Playwrights Jeffrey Hatcher and Eric Simonon answer that question with the world premiere at City Theatre of Louder Faster. The slamming-doors-and-mistaken-identities comedy gives the legendary Pittsburgh-born playwright writer's block and plops him back into his childhood home, where he's at the mercy of eccentric neighbors.

To have collaborating playwrights is apt enough in regard to famed collaborator Kaufman, whose credits include The Royal Family and You Can't Take It With You. Hatcher and Simonon previously teamed to write City's 2004 hit Work Song: Three Views of Frank Lloyd Wright; Hatcher himself also gave us Compleat Female Stage Beauty and Dr. Jekyll and Mr. Hyde. Still, half the attraction for Louder Faster is its cast of stellar local comedy talent, including Tony Bingham, Jeffrey Carpenter, Martin Giles, Patrick Jordan and Robyne Parrish.

Antigone, the third play in the classic Sophocles trilogy, focuses on the now-deceased King Oedipus' eponymous daughter. Her uncle Creon is the new king and her two brothers have fought a war on opposing sides. Creon declares the traitorous brother to be left unburied, and Antigone's defiance of this order sparks some very Greek tragedies. A new Prime Stage Theatre production stars high school senior Marie Karcher as Antigone and Shawn Dougherty as King Creon. Members of the Pittsburgh Youth Symphony provide music. The show opens Fri., May 13. 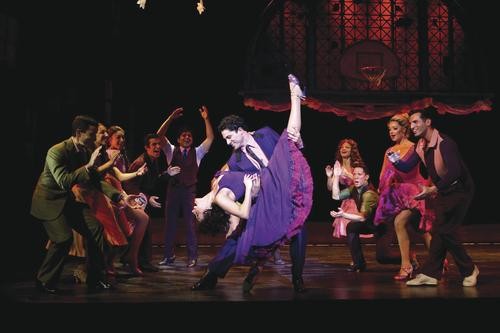 The touring version of the hit 2009 Broadway revival -- which clocked more performances than the 1957 original -- visits the Benedum Center for eight performances starting Tue., May 17. The production uses a recreation of Robbins' original choreography. And the cast of this New Yorkified Romeo and Juliet will still be singing "Something's Coming," "Tonight," "I Feel Pretty" and "Somewhere."