The Crucifer of Blood at PICT

It's another dose of Holmes for the holidays 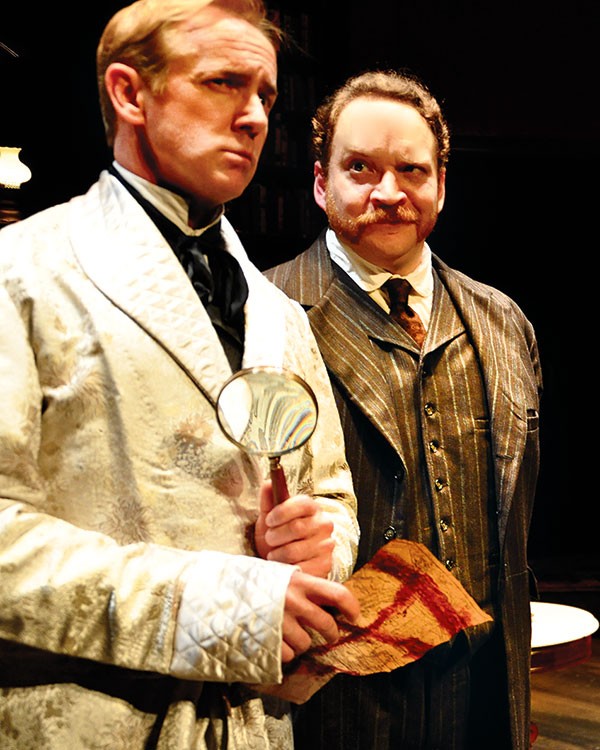 Photo courtesy of Suellen Fitzsimmons and PICT.
David Whalen (left) and Justin R.G. Holcomb in The Crucifer of Blood.

THE CRUCIFER OF BLOOD

Sherlock Holmes is one of fiction's most durable and resilient detectives. And for the holiday, Pittsburgh Irish & Classical Theatre gives us a dose of Sherlock in The Crucifer of Blood.

Based on Arthur Conan Doyle's novel The Sign of Four, and adapted for the stage by Paul Giovanni, the play had a Broadway run in the late 1970s and continues PICT's practice of season-ending Holmes shows. The tale of revenge and murder starts in India and ends 30 years later in London. Along the way, chicanery is afoot.

Ken Bolden and Jonathan Visser begin the play as a perfectly mismatched Mutt-and-Jeff pair whose actions incite the plot. Both do amazing jobs transforming themselves from British army officers to broken old men. Of the entire cast, Bolden is a real stand-out, meeting the physical challenges of the role head-on.

In The Crucifer of Blood, Inspector Lestrade is played for laughs, and Daryll Heysham doesn't miss a single one. He gets assistance from costumer Joan Markert, who supplies Heysham with the perfect comical suit.

Scenic designer Johnmichael Bohach had the Herculean task of putting five different sets on the Charity Randall stage, and he succeeded. The sets are detailed, and move beautifully. The only hiccup is a rowboat which (from my seat, at least) looked cartoonish. And the night I saw the show, a large piece of the apron masking crashed to the ground. Unfortunately, it occurred during a very quiet and intimate scene.

Director Matt Torney has paced the set changes very slowly and has chosen odd covers for them, like the one where Holmes pretends to play the violin. It went on so long that the audience began to chuckle. And the final set change all but gives away the ending of the play.

Crucifer is an odd but — at times — entertaining holiday gift.