The Crucible at Prime Stage

The revelations issue out of the agonies of the well-played characters, not just the playwright’s hand 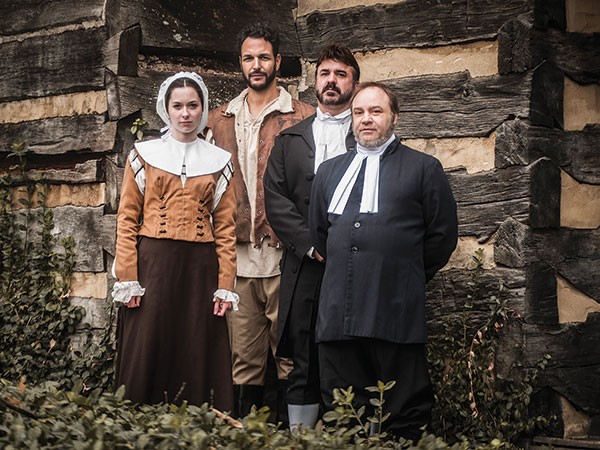 As the Rev. Hale states during the mania that fuels The Crucible, “These are strange times.” Indeed, the 1953 play by Arthur Miller, as produced by Prime Stage Theatre, reminds us how strange the times always are, whether the 17th century or the 21st.  And that this story of the Salem witch trials is just as relevant to our age as it was to the paranoid McCarthyism of the 1950s, upon which it is based.

However, it’s a credit to the cast, and the director, Scott P. Calhoon, that the revelations achieved issue out of the agonies of the well-played characters, not just the playwright’s hand.

The plot revolves around an affair between John Proctor (Jason Spider Matthews), a married farmer, and young Abigail Williams (Adrianne Knapp). Matthews, who has powerful stage presence, seems miscast as the complex Proctor, like a tight end thrust into the role of quarterback. He is all bass and no treble, but although it might be difficult to hear some of his lines, he still generates the passion necessary for this morally tortured protagonist.

Knapp, who has the articulate eyes of a silent-film actress, becomes more monstrous as the play evolves, producing moments where she not only frightens the children and adults of Salem into terrible acts, but frightens the audience as well. This is one girl you do not want to knock on your door on Halloween.

George Saulnier gives the strongest performance as the aforementioned Rev. Hale. The depth of his spiritual transmogrification — one of the toughest challenges of this play — is utterly believable, because it is done in such minute steps. Hale is the only soul able to keep a clear mind in the fog of insanity that envelops the drama (and metaphorically, the stage, at the beginning of the show).

Linda Haston, as the slave Tituba, is absolutely convincing of the devil’s existence in her one powerful scene.

Johnmichael Bohach’s modernist set looks like the Shakers tried to build Fritz Lang’s Metropolis, and feels incongruous with the Puritan costumes. But J.R. Shaw’s lighting achieves a wonderful crepuscularity, evoking a time of strangeness that can seem just as familiar today.