The Crucible at Little Lake Theater 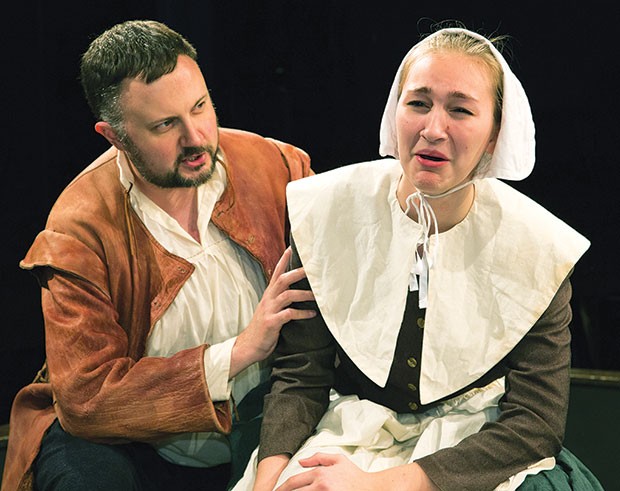 The Crucible, now playing at Little Lake Theatre Company, is a sight to behold. Although it debuted on Broadway 65 years ago, playwright Arthur Miller’s classic drama deals in themes that are as germane and revealing today as they were in the 1950s under McCarthyism — or in the austere 1690s, during which the play is set.

Under director Jena Oberg, the cast is top-notch. As leads, the always spot-on Eric Leslie imbues skeptical farmer John Proctor with equal amounts of feistiness and self-loathing, and the restrained Jennifer Sinatra as his wife, Elizabeth, plays the other half of the doomed couple caught up in the witch-hunt. On the more malevolent side, Elizabeth Bennett is a revelation as the unrepentant Abigail Williams, the once-lover of John Proctor as well as the eventual leader of the girls who freely accuse the Salem locals of colluding with Satan. Jilted prior to the start of the play, Abigail initially turns to witchcraft as a means to be with Proctor. But this scheme quickly gets away from her as old grudges and xenophobic religious fervor in puritanical Massachusetts boil over after the girls are discovered dancing in the forest.

In this opening sequence, when the girls gather around the bonfire led by the slave Tituba (the fantastic Fatu Sheriff), Oberg employs choreographer Melissa Tyler to elevate the magic ritual from run-of-the-mill into out-of-this-world with a dance that is as beautiful as it is unnerving. This otherworldly routine carries through each of the scene changes, with the girls appearing and disappearing, an omnipresent force in the other characters’ lives. An unusual but stunning choice, the choreography adds a level of bewitching surrealism to a show already brewing with its fair share of sorcery.

With Miller’s superb language at the forefront, this story is one that will sadly never lose its relevance. At turns sublime and caustic but always unflinching in its honestly about the horrors lurking in human nature, The Crucible is a classic of 20th-century drama for a reason. And with a cast more than up to the task, this production is one not to be missed.

This Streetcar does right by Blanche DuBois