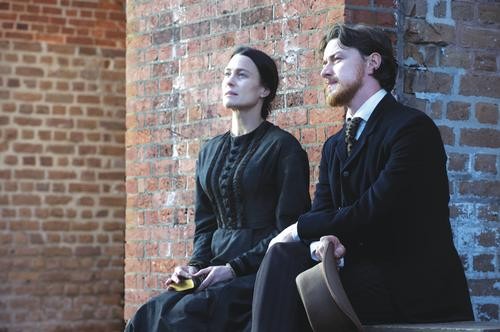 Robin Wright Penn and James McAvoy take a break from their trials.

The poster for this film which depicts the chipped stone head of Abraham Lincoln is a bit misleading. This isn't a film about our 16th president, but what happened after he was assassinated.

Following Lincoln's death and the capture of his assassin, John Wilkes Booth, seven men and one woman, Mary Surratt (at whose boarding house they met) are rounded up and charged with conspiring to kill the president. A young lawyer (and war vet), Frederick Aiken (James McAvoy), grudgingly takes up the defense of Surratt (Robin Wright Penn) at the military tribunal held to try her. In time, Aiken grows unsure about Surratt's guilt, though increasingly convinced that the legal proceedings are more geared toward public relations than strict constitutionality.

The release of this historical drama is undoubtedly timed to coincide with the anniversary of two events that inform its narrative: the start of the Civil War (150 years ago, this month) and the death Lincoln (April 15). But Robert Redford's film, from a script by James D. Solomon, is also clearly designed to dovetail neatly with today, what with our own nervous constituency and a slate of "enemy combatants" headed for tribunals rather than U.S. courtrooms.

You won't miss this point as the film gives Aiken several bits of pointed dialogue about (in)justice made in haste, "what we died defending" and legal maneuverings designed to serve political interests rather that the law. On the other hand, it's not quite as ham-fisted as Redford's last film-as-commentary, Lions for Lambs.

At its most basic, The Conspirator is a handsomely produced courtroom procedural-slash-morality play, rooted in less-familiar history. It marches along quite ably with an entertaining, if intentionally edifying, air and several solid performances. If Justin Long isn't entirely convincing as a roguish Union officer, you'll barely recognize Kevin Kline as Secretary of War Edward Stanton. Also reporting for duty are other reliable players including Tom Wilkinson, Colm Meaney and Danny Huston. Starts April 15.