The cast never fails to land any of playwright Sheridan's very numerous jokes. 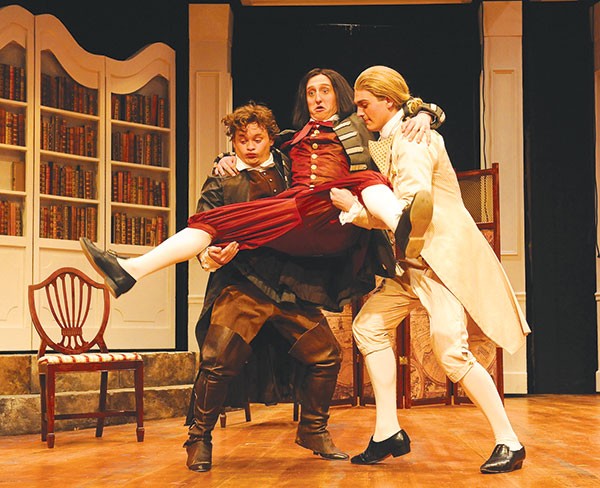 THE SCHOOL FOR SCANDAL

Not that my ability to "read" an audience is so very keen, but I've been at this for so long that not much surprises. So I'm amazed to report that twice in the past month, audiences didn't do as I expected. I felt sure people would go streaming from the Benedum once the potty-mouthed Book of Mormon got underway ... but no one moved. (Although when I learned that some people paid $150 for their seats, it made more sense.)

Even more shocking, I never would have guessed that at the Point Park University Conservatory Theatre Company production of The School for Scandal, the audience would exit in droves at intermission. To tell you the truth, I still can't figure it out.

This classic 1777 comedy by Richard Brinsley Sheridan had been intermittently entertaining throughout the first act, at times rising to the level of outright fun. So it was astonishing to see so many folks running to their cars ... astonishing and a little dismaying.

Director Alan Stanford has certainly attacked with gusto. Scandal is a play of two halves. One thread follows Sir Peter Teazle (in a solidly crafted performance by Jordon Ross Weinhold) and his attempts to rein in his disobedient wife (played with humor and strength by Lily Davis). The other thread finds Sir Oliver Surface testing the loyalty and morality of his two sons, Joseph and Charles. (Joe Rittenhouse, Stanley Graham and Tom Driscoll are expressive and expansive in the roles.) This plays out against a London-set background of gossiping, bitchy and back-biting lords, ladies and servants, from most of whom Stanford gets detailed performances as well.

It's true that Stanford's handling of the ensemble scenes can be flat and unfocussed, and the decision to stage a prologue written by a Sheridan contemporary turns out to be a big mistake. But in the two- and three-character scenes, Stanford does great work with this student cast. There's a consistent style to the playing, and they never fail to land any of Sheridan's very numerous jokes.

If you ask me, the people who left missed a fairly fun evening.