The Come Up tours with Mac Miller, gets Billboard attention

The duo from Braddock met in junior high 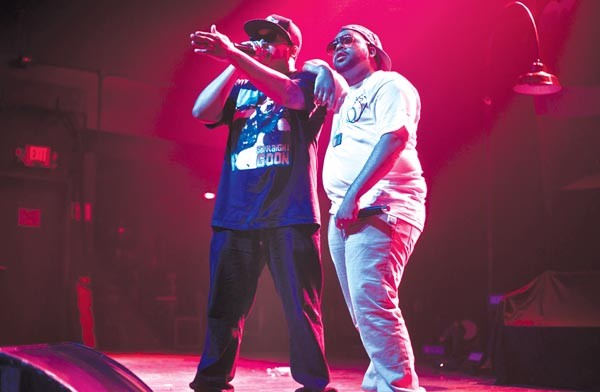 The Come Up: Franchise (left) and Vinny Radio

The Come Up's Vinny Radio and Franchise indulge in a lifestyle that has influenced several generations of musical geniuses. They call it "smipsy": a combination of being smoked out and tipsy — a condition that's further defined in their new single of the same name.

Franchise, 24, and Vinny, 23, met while attending Woodland Hills Junior High School. They soon began recording music on a karaoke machine with several teen-age classmates, and have been working together since.

"That's how we became close friends, actually: being mutually in-depth to the music," says Vinny.

During the week of Jan. 30, MTV featured the Pittsburgh hip-hop scene with commentary from Mac Miller, Wiz Khalifa and the ID Labs studio-production team. When speaking about the city's up-and-coming talent, Miller opined that The Come Up would be next local act to garner national recognition.

And Mac should know: Late last year, he booked the group to open his Blue Slide Park Tour, which invaded 22 cities nationwide. Billboard labeled The Come Up as a group most likely to perform a near-perfect set.

"What I wake up listening to is what's gonna inspire my writing that night," Vinny explains. "But my influences change daily. I could be listening to straight rap music one day and strictly Queens, New York, the next."

Following June 2011's In Good Hands album collaboration with producer Big Jerm, The Come Up is preparing a new release for spring. This could align with the group's participation in part of Mac Miller's Macadelic Tour, which will span five weeks from late March through April, with stops at a number of U.S. universities, concluding with a few overseas dates in June. But even as Fran and Vinny make waves in pursuit of success, it's hard to imagine them straying from their humble nature.