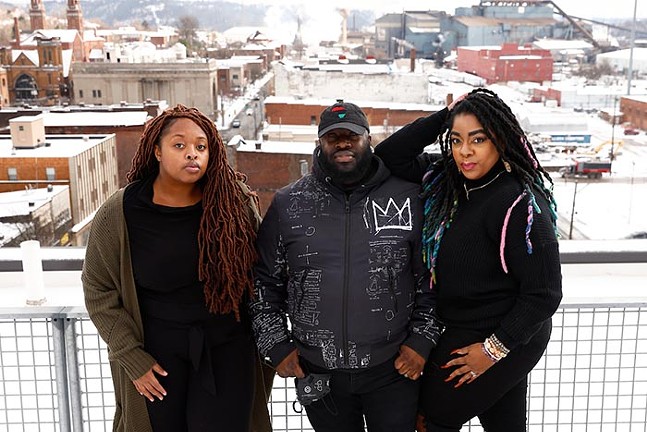 CP Photo: Jared Wickerham
The Coloured Section founders Zeal Eva, Natiq Jalil, and Crystal Noel Jalil
The journey of an artist is inspiring to watch. But for Black artists, the journey can be fraught with deadends, missed opportunities, and outright discrimination. While this is a national problem, it is especially notable here in Pittsburgh where Black artists often feel they are kept out of artist circles, and are left to make their own way.

One such Pittsburgh artist is Natiq Jalil, who, with the help of his mentor and his wife, artist and poet Crystal Noel Jalil, started The Coloured Section Black Artists’ Collective. Originally from Montgomery, Ala., Jalil has traveled to and lived in many cities — including New York, Washington, D.C., and Los Angeles — before settling down in the Steel City.

Jalil says he’s always been an artist, and his mother would recount stories about him being drawn to making art as a toddler. Still, he went to school to study Theoretical Physics but ended up getting his degree in Computer Science.

“My heart has always been with the arts. And so, for a while, I did spoken word poetry as a profession. Eventually, I started doing my visual arts and including words in it, which I still do to this day, and now I do art full time,” he says.

The collective’s second show InVisible, now on view at Downtown’s 820 Liberty Avenue gallery, was born out of a conversation between Jalil and featured artist Amun Ray, and focuses on themes of mental health and stigma in the Black community. The show features painting, sculpture, performance, multimedia installations, and poetry by 12 artists, including Jameelah Platt and Cheré D. Gordon, all exploring their personal battles with mental health.

CP Photo: Lisa Cunningham
A detail of Natiq Jalil's artwork at InVisible, on view at 820 Liberty Avenue
The show also explores the “trichotomy of the Black lived experience.” Jalil says that Black artists are “the unwanted, the copied, and the dismissed” and while the influence of Black artists can be seen virtually everywhere, they hardly get their due.

One of Jalil’s mentors, George Gist, was a professional portraitist, muralist, and jazz musician who lived in Pittsburgh’s Hill District. Jalil says that Gist came up with the idea for The Coloured Section, down to the name and the mission, but Gist died in 2020 before the project could come to fruition.

“George, he felt like there was way too much competition amongst the Black artists here in Pittsburgh. He felt like it was impeding our ability to fully take advantage of all the talent here,” says Jalil. “And so he wanted to start a collective that would focus on a true community amongst Black artists.”

Gist was widely respected in the Pittsburgh arts community, especially by those he mentored, so having his vision become a reality was important to Jalil, who operates The Coloured Section with both his wife and curator Zeal Eva.

The Coloured Section officially formed in November 2020, and their first show An<says>Tors was made in collaboration with the Pittsburgh Cultural Trust. The exhibition, curated by artists Zeal Eva and Jalil, premiered in September 2021 and featured art by a few select members of the collective.

“We are the artists that have had a hard time getting in through the front door, so to speak. And so we've had to come up with our own routes into the art world. I'm trying to leverage the name that I've built as Natiq in order to get The Coloured Section out there,” says Jalil. “So we really focus on artists that are either unknown, underrepresented somehow, or those that have struggled with mental health. Some have been ostracized a little bit, just any Black artist who has had a hard time getting their work out there.”

As far as the future goes, the group of artists plan to have four major shows every year, one for every season. They are looking to expand beyond Pittsburgh, and have some shows planned for L.A. this year.

While the collective is closed for membership currently, Jalil says that if an artist catches his eye, there is always an opportunity to be folded into the group.

“People have different expectations for us, but our own expectations are to overcome it all,” he says. “We welcome those eyes on us as an example of what Black folks can do when we really put our minds to it. We won't do everything perfectly, but we will put our best foot forward in everything.”The Coloured Section Black Artists' Collective presents InVisible. Continues through Feb. 13. 820 Liberty Ave., Downtown. Free. tinyurl.com/PittsburghInVisible

Five years in, Mostbeautifullest has altered Pittsburgh's nightlife scene for the better