The Colombian Spot, on the South Side, offers the fare of this South American country | Food | Pittsburgh | Pittsburgh City Paper

The Colombian Spot, on the South Side, offers the fare of this South American country

On the menu: arepas, corncakes stuffed with various fillings including, meats, cheese, beans and even fries 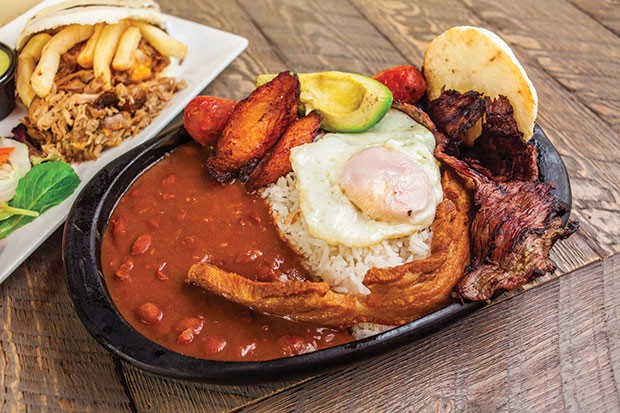 Pittsburgh may not presently have a particularly rich Latin culture, but that doesn’t mean it’s a desert of Central and South American cuisine. Quite aside from numerous Mexican restaurants all along the spectrum from farcical to fantastic, we have dined out on delicacies from El Salvador, Peru, Argentina and Brazil, all within a short jaunt. But there’s definitely room for more in this delicious niche, so we were excited by the opening of a Colombian restaurant on lively East Carson Street, where established and new concepts mix.

The Colombian Spot began as a stall at the late, lamented Pittsburgh Public Market and graduated to sit-down service in its very own storefront. The space of the former 1889 Cafe has been stripped of its ’90s decor and made over as a simple, open dining room decorated with native crafts. A large chalkboard wall was put to good use, displaying artistically rendered descriptions of Colombia’s national food (arepas) and drink (guarapo, sugar-cane juice flavored with fruits and spices). The TV broadcast a Spanish sports feed, the music was tropical, and the feeling was festive and beachy.

The menu offered a few starters and salads, a few entrees, and an array of arepas. Arepas are a relative of gorditas, the Mexican corn cakes that are split open like miniature pitas. The Colombian Spot makes its arepas in house from scratch, down to grinding its own hominy. The result was, in a word, spectacular. The cake was tender, something like polenta, but grilled to create edges as crisp as a griddled tortilla.

The menu offers a dozen varieties of stuffed arepas, ranging from humble bean and cheese to Mexican (filled with pork, guacamole, cheese and jalapeños) and Steel City (pork, cheese and — of course — fries). We sampled the simplest, cheese, and a meatier option, ropa vieja. The latter is classically a Cuban dish featuring shredded beef with, among other things, olives, but this version used green peppers in a tomato sauce that was reminiscent of a sloppy joe. The meat was tender and flavorful, the sauce faintly piquant, and maduros — sweet fried plantains — added a distinctly tropical dimension to both flavor and texture. The arepa de queso used melty mozzarella in combination with crumbled queso fresco, which was tender but not gooey, resulting in a pleasing variety of texture and a creamy-salty flavor that enriched the plain corncake.

We also tried two empanadas, chicken and vegetarian. While some Latin American countries make these savory turnovers with flaky crusts, those at Colombian Spot were formed from a cornmeal dough, with a texture like the bottom crust of good cornbread. The fillings were excellent, as well. Potatoes and tomatoes added starchy bulk and bright astringency to tender shredded chicken, while spinach, black beans and rice made for a substantial, satisfying vegetarian treat.

Maduros’ siblings are tostones, non-sweet plantain smashed flat and fried. Sometimes this results in something hearty, but Colombian Spot’s were thin, almost chip-like. They provided a wonderful layer for pernil, roasted pork shoulder, shredded and served atop a bed of black beans. We could have eaten this all night, especially drizzled with delicious, housemade, vinegary hot sauce.

Instead, we left room for bandeja paisa and a Colombian hamburger. The menu calls the former “the most popular Colombian dish,” and it’s no wonder why: It combines shredded beef, chorizo, fried pork belly and red beans, served atop white rice and topped with maduros, avocado and a fried egg. Unannounced, we were served a thin steak instead of shredded beef, which Jason found bold but Angelique thought overdone. But it was OK, because everything else was so good. The big red beans were creamy in texture and bold in flavor. The thick slice of pork belly was deep-fried and tough, but once cut into bits and stirred into the rice, it added a pleasing burst of umami. The chorizo was an intriguing cross between the tenderness of good kielbasa and the mild paprika spice of Spanish chorizo.

Meanwhile, the Colombian burger was topped with lettuce, tomato and onions plus ham, bacon, ketchup, mayo, mustard, pineapple sauce and blackberry sauce. It was both absurd and delicious, the panoply of toppings and sauces taking the all-beef patty to places American gourmet-burger chefs haven’t dared to tread. It was also enormous; you may wish to try its junior partner, the Colombian hot dog, which swaps the bacon and ham for queso fresco.

The Colombian Spot goes beyond novelty, offering variety, quality and a dining experience that made us want to go back, and soon.