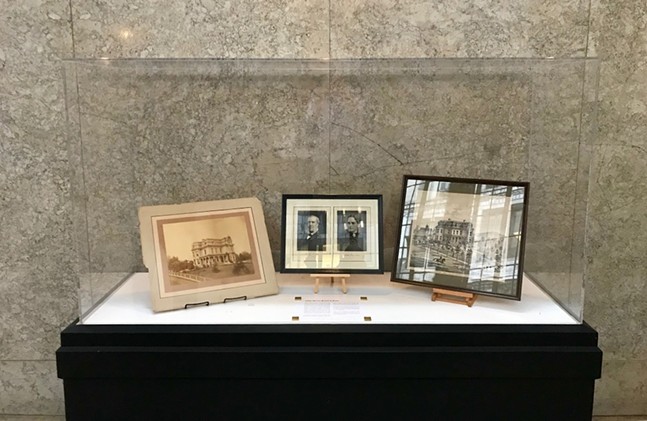 Photo: City of Pittsburgh Office of the City Clerk
Adam Mercer Brown Collection currently on display in the City-County Building lobby
Have you ever wanted to be Indiana Jones, traveling the world, saving artifacts (or, more realistically, pillaging the historical remains of various cultures)? Now you can do it on a more local and less appropriative scale for the City of Pittsburgh.

The Office of the Mayor and Office of the City Clerk have called on the public to help recover lost or missing city records and artifacts. It adds to the City’s mission to evaluate and catalog various historical materials and records, some of which date back over 200 years. These include maps and minute books, a term used to describe a detailed record of official meetings.

This process revealed certain materials had disappeared from City offices and facilities over the centuries. To get them back, amnesty is being offered to anyone who voluntarily returns suspected City or Authority-owned property.

“This initiative is about recovering pieces of our history,” says City Clerk Brenda Pree in a press release. “It will complement the work we’ve been doing over the past several years to better manage City records and to ensure that the public has access to them.”

The initiative takes inspiration from a 2016 effort by Pittsburgh Public Schools and Friends of Art to recover missing portions of a century-old curated collection of artworks donated to local schools and valued at a combined $1.1 million. To incentivize people to come forward, any returned art was accepted with no questions asked and no penalties or publicity.

So far, some items have been recovered, including a minute book chronicling the Borough of Pittsburgh from 1794 to 1802, first reported missing in 1895. The book was returned by the Pennsylvania Historical Society, who bought it in 1912. The Meanor Family of North Carolina turned over a collection of papers and photographs from Adam Mercer Brown, technically Pittsburgh's first mayor (his title in 1901 was “City Recorder").

Photo: City of Pittsburgh Office of the City Clerk
Adam Mercer Brown and Lucetta Turney Brown
The list of missing items varies widely but includes documents or correspondences by past mayors of Pittsburgh and other officials, blueprints of projects by the Department of Public Works, and Public Safety Bureau badges, patches, insignia, and emblems.

“Pittsburgh has a rich and dynamic history,” says Mayor William Peduto in a press release. "These records not only tell the story of our city, we find many of them useful as we tackle today’s challenges from infrastructure to housing.”

Anyone who believes they possess a lost piece of Pittsburgh’s past should contact City Archivist Nick Hartley at nicholas.hartley@pittsburghpa.gov or 412-255-0873 with a description of their findings.