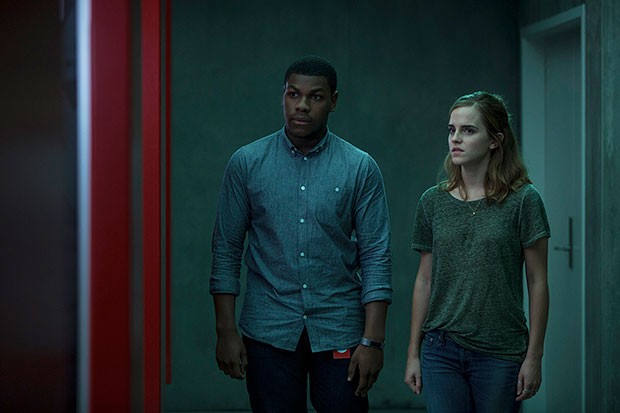 Something is not right at The Circle: John Boyega and Emma Watson

Mae (Emma Watson) has a shitty job, a shitty car and lives in a forlorn corner of California, with her parents (Glenne Headly, Bill Paxton). It seems like a straight line to nowhere, until her buddy Annie (Karen Gillan) gets her a hook-up at the social-media company The Circle. It’s the sort of high-paying tech-workers’ paradise that is literally a walled garden of dog yoga, free meals and Friday-night Beck concerts. What could possibly go wrong?

James Ponsoldt’s wannabe thriller The Circle is adapted from Dave Eggers’ novel, and it’s a toothless stroll through what could have been a more biting or terrifying tale. But alas, the film seems more interested in set-up then any sort of thoughtful, or even logical, conclusion.

So for the first half, we get the starry-eyed trip to Silicon Valley, where The Circle hums along in a circular building (not unlike Apple’s new campus). Mae aces a ridiculously hip interview (in a circular office, natch) with rapid-fire questions like: “Introspection or communications?” “Ever own a Velcro wallet?” “Sushi or soylent?” (Mae quickly affirms “sushi,” but I feel that “soylent” is the better answer: Everybody says sushi.)

The defining ethos at The Circle is to take “the chaos of the web and make it elegant and simple.” (Good luck with that, Circlers.) But it’s just tech babble for a company that wants to trade the fun and convenience of social media for knowing absolutely everything about its consumers, and then, ideally, to mandate and control behavior. Because “sharing is caring.”

The company hosts Dream Fridays lectures, in which the laidback CEO, Bailey (Tom Hanks), rolls out the nonsense, like how secretly putting marble-sized cameras everywhere is all about human-rights accountability. (Later, it’s a throwaway gag that one of these is in the ladies room.)

But Mae falls under Bailey’s spell, and in time-honored tradition, she sells her soul to a 24/7 web-cam deal to make the whole world feel closer; it’s really creepy, and nobody seems to care or question it. The story isn’t helped by Watson, who gives a weird performance as Mae, who forever looks like she is deeply unsure about everything, while instantly capitulating to the most intrusive and problematic new schemes.

In fact, The Circle is utterly undone by its failure to know what it wants to say, and to commit to a strategy. At times, it flirts with satire, then it turns as maudlin as a TV movie. It walks right past the remarkably low-hanging fruit of the perils of social media, and of what, if any, ethical quandaries all this non-stop interconnection is creating. Ideally, the film should have failed in an entertaining way — #mustseetrainwreck — but it’s a parable of obviousness without much point. Like the heralded circle, viewers should end up right back where they started.