If we've learned anything from Kevin Smith, Garden State and the Toxic Avenger, it's that New Jersey is a weird place: quirky people, surreal coincidences, lots of strip malls and bad hair. In fiction, New Jersey is where America dumps all its well-meaning freaks and their hokey pastimes. Now we can add The Chicken Snake, a world premiere by Amy Hartman and performed by the Playhouse REP, to the canon of bizarre Jersey dramas. How bizarre? The play opens in June, and there's a blizzard outside. And a stabbed clown is sprawled in a truck. And a magician is smoking dope in his easy chair, talking to the apparition of his dying wife. Stuff like that.

Hartman has worked hard to the make the Hanford family eccentric, giving its members goofy jobs and major maladies. The father's insane, the son won't go outside; Daughter 1 carries a stopwatch and a clipboard wherever she goes, and Daughter 2 carries a whiskey bottle and a coat covered in blood. Mom's upstairs dying of cancer, and the neighborhood kids have grown up to become bullies and liars.

But in the end, The Chicken Snake is a straightforward family drama -- people are introduced one at a time, they express their problems, secrets are revealed, shouting erupts, and catharsis is reached. This is the thrust of Tennessee Williams, Eugene O'Neill and most real-life Thanksgiving dinners, so there's no reason the formula shouldn't work here. And it does: The Chicken Snake is just weird enough, just magical enough, to raise our eyebrows.

The first act, at least, is a joyride of insecurity, colored with slapstick and one-liners. By the time we reach the Big Downer (in family drama, the Big Downer is inevitable), we're invested in the Hanfords; in spite of their car-jacking and self-loathing and obsessive-compulsive natures, we have a kind of crush on them.

Part of this affection is for the cast, whose work defies easy description. As Mr. and Mrs. Hanford, Martin Giles and Mary Rawson are a most convincing married couple; their love is dimpled with cheek-pecking and inside jokes and spontaneous dancing -- the sugary habits of couples who are incredibly happy and don't give a damn what the neighbors think. Dana Hardy, Andy Rebensteine and Tami Dixon play the bickering kids with equal realism; they boomerang in seconds from high comedy to low tragedy. Hartman could not have prayed for a better cast; director John Shepard could not have hoped for a better play. Newly hatched, The Chicken Snake may have a long and happy life. 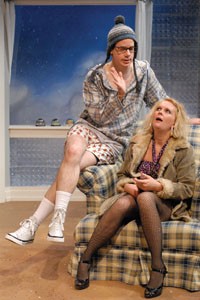 Photo courtesy of the Pittsburgh Playhouse.
Oh, my family's crazy, too: Andy Rebensteine (left) and Tami Dixon in Playhouse REP's The Chicken Snake.