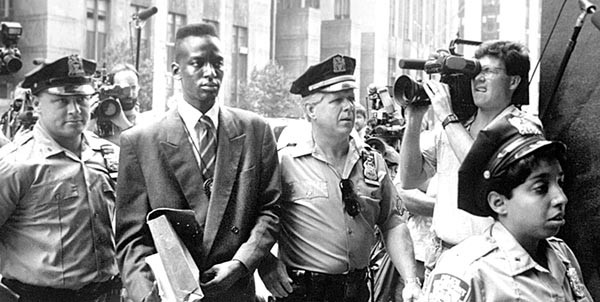 Center of the storm: Yusef Salaam, during the trial

Every now and then, a not-so-uncommon crime explodes into national consciousness, and becomes the flashpoint for other larger, unresolved societal issues. So it was on April 19, 1989, when a young white female jogger was beaten and raped in New York City's Central Park. Amid a media frenzy, five black and Puerto Rican teen-age boys were swiftly apprehended and charged; later, they were convicted and sent to jail. More than a decade later, the sentences were vacated; they hadn't done it.

What happened — what went very wrong and why — is the focus of The Central Park Five. The documentary is co-directed by Sarah Burns (who wrote a book on the case), her father (and noted documentarian) Ken Burns and her husband, David McMahon.

Because the response to the crime reflected the time and place, the filmmakers first set the scene. In the late 1980s, New York City was a city reveling in a new period of ostentatious wealth, but also reeling from institutional poverty, violence spurred by the crack wars and youth gangs, and media-driven racial flare-ups. It was the perfect Petri dish for the jogger case to be blown up and fueled by anxieties and tensions rather than carefully investigated. For the psychic good of the city, the crime simply had to be solved.

In contemporary interviews, the Central Park Five — Antron McCray, Kevin Richardson, Raymond Santana, Kharey Wise and Yusef Salaam — recount the events of that night, their subsequent interrogation, and how, in matter of hours, they confessed to a crime they didn't commit. From the start, the city roared — from bombastic media (who coined the term "wilding") and outraged citizens, to politicians and other public figures eager to advance agendas. The filmmakers chiefly use archival footage here, though the occasional journalist, lawyer or public figure reflects back. (There are no interviews with the cops or prosecutors.) Even armchair jurists will be alarmed at how the investigation, interrogation and subsequent trial unfolded.

Despite the resolution, this is a grim story. What's clear in hindsight is a devastating irony: a city so eager to prove that the system worked ultimately only proved how the system failed. It's a sobering film that details a past injustice, but also puts us on notice. If such an emotionally and racially loaded incident happened today, would the system work any better? Would the media be less complicit and reactionary, and would we just accept the "facts" because they fit a believable story supported by our own prejudices? We can hope, but it seems unlikely.