The Censor at Throughline Theatre Co.

A lot of the fun is guessing where Williams is going to take us in the second act. 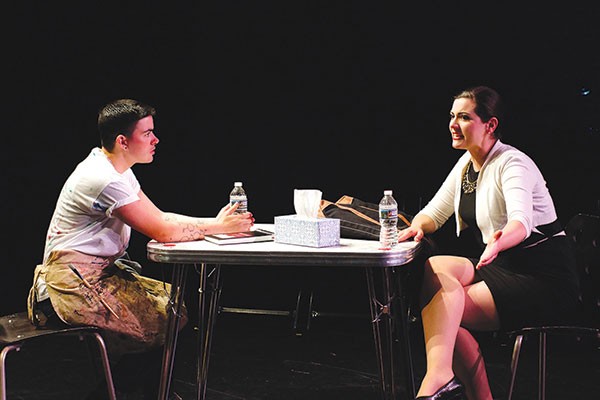 As part of its “Can You Trust the Government?” season, Throughline Theatre Company presents the world premiere of locally based playwright David L. Williams’ very creepy The Censor, in which the answer to that seasonal question is a resounding no.

The play is set in a parallel-reality America called The Commonwealth, presided over by a royal family and administered by lots of officials.

The Commonwealth has, up until now, avoided an area known as The Islands but is now beginning take an interest. Charlotte Coates, from the Ministry of Art, comes to The Islands tasked with reining in artists whose work challenges the tenets of the state.

Williams nicely subverts our notion of a censor in an authoritarian regime, and both the character of Charlotte and the first act of his play are shadowy and highly compelling; a lot of the fun is guessing where he’s going to take us in the second act.

The answer, unfortunately, turns out to be nowhere particular. I don’t want to reveal secrets, but the tone and focus is all over the place; motivations change by whim, and where the play had been chugging along nicely, Williams suddenly throws up a number of nonsensical obstacles. Characters you were enjoying for their smarts and savvy are suddenly thick and emotionally paralyzed.

Williams has also written in a curious transgender subplot. It’s not offensive or exploitive; he obviously cares about the community and its issues. It’s just that the character feels grafted in from a different story.

Maura Underwood plays the hell out of Charlotte; she’s mesmerizing in the role and — until she’s overwhelmed by the script — her acting choices are surprising and convincing. Christopher Collier and Jessie Wray Goodman do strong work in nebulously defined roles, and Liam Ezra Dickinson puts great effort into humanizing a role that the playwright has written more as an idea than a person.

It’s hardly news that the second act of a brand-new script needs work. There’s a lot of great stuff happening in The Censor, and Williams just needs extend it to both acts.