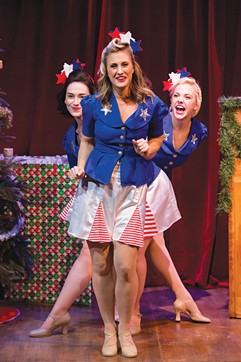 It is December 1944, and the VFW is empty as the final year of World War II rages on. The Carols, a new musical with book and lyrics by Jennifer Childs and music by Pittsburgh-based Monica Stephenson, depicts three sisters (The Carols) insisting upon staging their annual production of A Christmas Carol. However, this year they will play all the roles themselves, with help from crotchety building-keeper Miss Betty and tap-dancing Jewish comedian Melvin Shaatz. Nick Stamatakis pulls double duty as music director and onstage accompanist Teddy.

Moira Quigley narrates as the middle child, Lily. She is grounded, sincere and eager to hold onto traditions in a world where the people she shares them with seem to be slipping away so fast. Her dark hair sets her apart from her blonde sisters, Rose and Sylvia, played by Mandie Russak and Kate Queen-Toole, respectively. The trio’s vocals carry the memories and love of real sisterhood and hold the show together.

Stephenson’s music starts off with a beautiful risk: the three Carol sisters singing three-part a cappella harmony. The Duquesne School of Music grad would’ve been smart to carry this style throughout the show, making it feel fresher than the traditional musical-theater fluff that follows.

Director Robyne Parrish works against the first act’s pacing problems by milking every ounce of charm out of the Carol sisters. She’s worked hard to create light holiday fare that everyone can enjoy.

The Carols, at Carnegie Stage is by no stretch perfect. Running gags wear thin, plot lines lose focus, and the show relies too heavily on well-established Christmas tropes. However, The Carols is worth revising, as the heart is there, and for a holiday show, that’s essential. At its core, The Carols is about loss, and the power the holidays have to reconnect us.