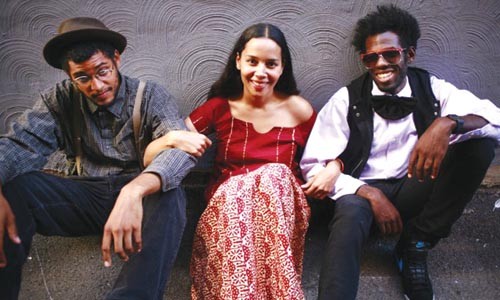 The Carolina Chocolate Drops want you to know a few things right away. First, they play traditional, old-time string-band music. And second -- to be noted immediately after the first point -- they are modern musicians. It's a tough balance to strike, but the North Carolina trio of multi-instrumentalists -- Justin Robinson, Rhiannon Giddens and Dom Flemons -- has been pulling it off for half a decade.

The Drops adhere to a particular idea of authenticity. Just take the Drops' newest album: Called Genuine Negro Jig, it's filled with exactly that -- furiously strummed and picked updates of traditional Piedmont tunes. "We knew that title would be provocative when we chose it," says Robinson. "What we're trying to do is be genuine and authentic, but to our version of the music. We filter anything we've ever heard through old-time music."

So although these children of the '80s grew up more on hip hop than front-porch string bands (Robinson is a self-professed Wu-Tang Clan lover), they aim to incorporate their thoroughly modern lives into an old-time musical landscape.

"Things have not changed that much -- songs are still written about love and disappointment and goin' to jail and gettin' out and killin' somebody and almost gettin' killed," says Robinson. No wonder, then, that the Drops seamlessly mix traditional tunes with originals like the gorgeous, plaintive "Kissin' and Cussin'" and modern covers, including the 2001 Blu Cantrell R&B hit "Hit 'Em Up Style (Oops!)."

To Robinson, the music's background takes a backseat to simple pleasure: "I just like the sound of it."